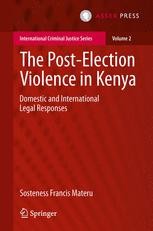 The Post-Election Violence in Kenya

Since the historic Nuremberg Trial of 1945 an international customary law principle has developed that commission of a core crime under international law – war crimes, genocide, crimes against humanity and aggression – should not go unpunished.

History shows, that when in Africa such violations occurred, especially as a result of election disputes, national and regional actors, including the African Union, resorted to political rather than legal responses. However, when crimes against humanity were alleged to have been committed in Kenya during the 2007-2008 post-election violence, a promising road map for criminal accountability was agreed upon alongside a political solution.

In the spirit of this road map, the author analyzes the post-election violence in Kenya from a legal point of view. He extensively examines legal options for domestic criminal accountability and discusses both retributive (prosecutions) and restorative justice (mainly truth commission) mechanisms, being the main legal responses to the gross violations of human rights. Furthermore, he thoroughly investigates the Kenya situation before the ICC and the legal-cum-political responses to the ICC intervention in Kenya.

Practitioners and academics in the field of international criminal law and related disciplines, as well as political sciences and (legal) history will find in this book highly relevant information about alternative legal approaches of the fight against and punishment of crimes against humanity, as defined under the ICC Statute.

Sosteness Francis Materu is a lecturer in the Faculty of Law of the University of Dar es Salaam (Tanzania). He obtained his Bachelors Laws Degree (LL.B) from the same University in 2008, a Master of Laws Degree (LL.M) from the University of the Western Cape (South Africa) in 2010, and a Doctorate in Law from Humboldt-Universität zu Berlin (Germany) in 2014. He is also a proud alumnus of the South African-German Centre for Transnational Criminal Justice.