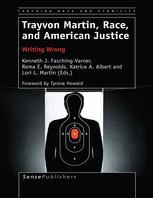 Trayvon Martin, Race, and “American Justice”: Writing Wrong is the first comprehensive text to analyze not only the killing of Trayvon Martin, but the implications of this event for the state of race in the United States. Bringing together contributions from a variety of disciplines and approaches, this text pushes readers to answer the question: “In the wake of the killing of Trayvon Martin, and the acquittal of his killer, how post-racial can we claim to be?” This collection of short and powerful chapters is at times angering and at times hopeful, but always thought provoking, critical, and poignant. This interdisciplinary volume is well suited for undergraduate and graduate students as well as faculty in sociology, social work, law, communication, and education. This book can also be read by anyone interested in social justice and equity through the lens of race in the 21st century.
“This text is an invitation to a rebellion—the inevitable insurgency of Black youth brewing right now across the land as the descendants of enslaved workers step up to exercise their agency, and at that moment become agents of liberty and actors in history.” – William Ayers, Distinguished Professor from the University of Illinois–Chicago
“… the authors […] offer incisive and vivid examinations of the contours of white supremacy today, inviting readers into a much-needed discussion of moral questions surrounding the very foundation life in the U.S.” – Christine Sleeter, Professor Emerita, California State University Monterey
“Trayvon Martin, Race, and American Justice: Writing Wrong is a powerful assemblage of voices that speak to the salience of race, gender, and their intersection. Collectively, the authors provide us with poignant reminders of the multiple forces that rail against Black males in our society. Each chapter grabs our attention, ignites our activism, and encourages us to remain steadfast in the struggle toward a true democracy for all Americans – a society where Black males’ lives are valued and they no longer face daily threats to their humanity.”
– Yolanda Sealey-Ruiz, Assistant Professor, Teachers College, Columbia University
“While motivated by Trayvon Martin’s unfortunate and tragic death, this impressive collection serves as a one-of-a-kind tribute to Martin and will help to keep his legacy alive. The contributions are evocative and accessible, and while the focus is on Martin, the contributions also call attention to mundane, severe, and systemic racial wrongdoings, biases in existing research, colorblindness and white privilege, and erasures of history and failures of memory.”
– Tony E. Adams, Professor at Northeastern Illinois University and NCA book award winner
“The editors and contributors have taken a tragic topic and presented it in a way that is engaging, effective, and surprisingly optimistic. There is a style for everyone here, making it a great text for multiple audiences and classrooms. A truly superb addition to any classroom and a great read for those interested in social justice in today’s world.”
– U. Melissa Anyiwo, Professor and Coordinator of African American Studies, Curry College
“Trayvon Martin, Race, and American Justice: Writing Wrong is true to its title; it focuses attention—through critical writing—on the pernicious, pervasive, and persistent violence waged against black men, especially black male youth, in American society. Using the still unpunished pre-meditated murder of Trayvon Martin as a highly emblematic example of this violence, the editors and authors use carefully crafted and sequenced poetry and prose to write truth to power about the economic, political, social, and cultural factors that produce and reproduce systemic aggression toward especially men and boys of African descent, but also
toward members of other societally minoritized groups. The breadth and depth of the contributions included in Trayvon Martin, Race, and American Justice: Writing Wrong makes it a particularly valuable resource for faculty and students engaged in teaching, learning, research, service, and activism related to issues of race, racism, blackness, whiteness, class, caste, classism, language, dialect, literacy, linguicism, geographic and national origin, immigration status, sex, gender, gender identity and expression, masculinity, sexual orientation, size, appearance, and, more broadly, equity, equality, and social justice. Chapters reflect the thoughtful insight and advanced expertise of their authors, who bring increased levels of complexity to historical and contemporary dialogue, discussion, and debate about especially race and racism in the United States. The editors’ selection of contributors and organization of contributions balances pain truth-telling with hope and possibility for a more just future. In sum, Trayvon Martin, Race, and American Justice: Writing Wrong reciprocally links theory and practice relating to issues of power, privilege, oppression, discrimination—and liberation.”
– Christine Clark, Professor & Senior Scholar in Multicultural Education, and Founding Vice President for Diversity and Inclusion, University of Nevada, Las Vegas

“Chapters in this timely and probing book stare straight at a difficult incident, refuse to ignore injustice, but call on a higher purpose of great academic criticism in “writing the wrong.” Here the wrong is the corrosive and sometimes lethal bias by many in power toward black males, who are too often seen as dangerous and disposable in American society. The killing of Trayvon Martin and the subsequent acquittal of his killer George Zimmerman are examined by minds informed by reflection on theory and history. We hear of conversations that black parents, particularly mothers who often felt on trial themselves, had with their teenage sons. Some of these endangered sons were outraged by the act and verdict, while some others were indifferent. Chapters are devoted to the incident, the trial and aftermath, and to the future of the struggle against racial injustice. Through what T. J. Yosso calls “resistant capital” we are urged to continue to interrogate a judicial system that prosecutes not only black males but their parents and families. There is much to learn here about the current state of social justice and the way we live with and among each other. In both prose and poetry these impassioned authors strive to write the wrong of Trayvon Martin and many others like him. I recommend this volume highly and will use it in my graduate classes.”
– AG Rud, Distinguished Professor, College of Education, Washington State University
Kenneth J. Fasching-Varner, PhD is Shirley B. Barton Endowed Assistant Professor of Foundations and Elementary Education and holds a Ph.D in Language, Literacy, and Culture from The Ohio State University.
Rema E. Reynolds, PhD is Assistant Professor of Education Policy, Organization, and Leadership and holds a doctorate in Education from the University of California, Los Angeles.
Katrice A. Albert, PhD is Vice President for Equity and Diversity and holds a doctorate in Counseling from Auburn University.
Lori L. Martin, PhD is Associate Professor of Sociology and African American Studies and holds a doctorate in Sociology from University of Albany, State University of New York.