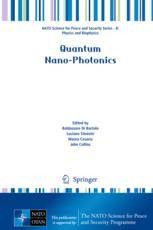 This book brings together more closely researchers working in the two fields of quantum optics and nano-optics and provides a general overview of the main topics of interest in applied and fundamental research. The contributions cover, for example, single-photon emitters and emitters of entangled photon pairs based on epitaxially grown semiconductor quantum dots, nitrogen vacancy centers in diamond as single-photon emitters, coupled quantum bits based on trapped ions, integrated waveguide superconducting nanowire single-photon detectors, quantum nano-plasmonics, nanosensing, quantum aspects of biophotonics and quantum metamaterials. The articles span the bridge from pedagogical introductions on the fundamental principles to the current state-of-the-art, and are authored by pioneers and leaders in the field. Numerical simulations are presented as a powerful tool to gain insight into the physical behavior of nanophotonic systems and provide a critical complement to experimental investigations and design of devices.

Baldassare (friendly called Rino by friends) teaches physics at Boston College. He got his first degree in Industrial Engineering at the University of Palermo and followed his studies in Telecommunications and Radar Technique in Rome at the Superior Institute of Telecommunications and National Research Council, respectively.

After an insdustrial experience in Italy he moved to the United States where he gained a Ph.D. in Physics at the Massachusetts Institute of Technology.

An industrail experience in USA in the of laser physics was a prelude to his joining Boston College where he has been teaching since 1968.

He has been the director of the International Atomic and Molecular Spectroscopy of the Ettore Majorana center in Erice Sicily, Italy since 1974

Since 2011 he has been the Scientific Secretary of the International School of Atomic and Molecular Spectroscopy in Erice. He has been part of the organizing committee of the last four NATO ASI on Nano-Optics and Nano-Photonics, and three Workshops on Luminescence.

He is currently completing his Doctoral degree in theoretical physics at Boston College. His research interests have shifted to strongly coupled plasmas and nuclear fusion.

Cesaria Maura graduated in Physics cum laude in 2008 at the University of Salento (Lecce, Italy) and received her Ph.D. degree in Physics in 2012 at the University of Salento (Lecce, Italy) with a thesis dealing with the experimental and theoretical characterization of very thin Cr-doped ITO films deposited by pulsed laser ablation for spintronic applications. Since then she has worked as a research fellow in Italy in the fields of material science and nanophotonics. Her research activity at the Physics Department of the University of Salento have focused on laser-based deposition techniques (i.e., nano- and femto-second PLD, MAPLE) for depositing inorganic bulk materials and nanostructures as well as monolayer and multilayer of emitting polymers. In this framework her studies contributed to the understanding of the origin of itinerant ferromagnetism in Cr-doped ITO films as related to Cr-oxygen vacancy complexes, the development ex-novo of a theoretical algorithm and experimental spectrophotometric procedure for calculating a realistic absorption coefficient of (ultra)thin films covering transparent substrates that first and only one includes the non measurable contribution from the film-substrate interface, and the realization of the first white light emitting diode made by multi-layer polymeric thin films.

More recently, her activity as a fixed-term researcher at the IMM-CNR Institute (unit of Lecce-Italy) has focused on PDMS-based microfluidics and colloidal lithography techniques for sensing applications using plasmonic nanoparticles and short-range ordered nanohole arrays .

Since 2013 she contributes to the organization of the Spectroscopy School held at the Majorana Foundation (Erice, Italy) and collaborates with Prof. Di Bartolo (Boston College (MA, USA)) in spectroscopy studies of white-light emitting nanophosphors.

John Collins is a Professor of Physics at Wheaton College in Norton, MA USA. His research areas of interest involve the interaction of radiation with matter. He is an experimental physicist trained in the field of luminescence spectroscopy of solids doped with transition metal and rare earth ions. Specific areas of interest include energy transfer, nonradiative processes, luminescence in nanosystems, and plasmonic effects on radiative and non-radiative processes of excited ions in solids. Dr. Collins has co-edited several books and journal volumes on topics such as spectroscopy of solids, nano-optics, biophotonics, and visible and infrared phosphors, and has authored or co-authored numerous articles and book chapters. He has served as Chair of the Luminescence and Display Materials Division of the Electrochemical Society and currently serves on its Executive Committee, and also serves on the Organizing Committee of the International School of Atomic and Molecular Spectroscopy.
Show all
Reviews

“The book will be useful to graduate students entering the field of quantum nanophotonics, as well as to those already working there but wanting to deepen their understanding or broaden their interests.” (Mark Fox, Optics & Photonics News, osa-opn.org, April 18, 2019)