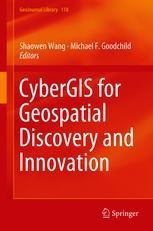 CyberGIS for Geospatial Discovery and Innovation

About this book
This book elucidates how cyberGIS (that is, new-generation geographic information science and systems (GIS) based on advanced computing and cyberinfrastructure) transforms computation- and data-intensive geospatial discovery and innovation. It comprehensively addresses opportunities and challenges, roadmaps for research and development, and major progress, trends, and impacts of cyberGIS in the era of big data. The book serves as an authoritative source of information to fill the void of introducing this exciting and growing field. By providing a set of representative applications and science drivers of cyberGIS, this book demonstrates how cyberGIS has been advanced to enable cutting-edge scientific research and innovative geospatial application development. Such cyberGIS advances are contextualized as diverse but interrelated science and technology frontiers. The book also emphasizes several important social dimensions of cyberGIS such as for empowering deliberative civic engagement and enabling collaborative problem solving through structured participation. In sum, this book will be a great resource to students, academics, and geospatial professionals for leaning cutting-edge cyberGIS, geospatial data science, high-performance computing, and related applications and sciences.

Shaowen Wang is a Professor and Head of the Department of Geography and Geographic Information Science; Richard and Margaret Romano Professorial Scholar in the College of Liberal Arts and Sciences; and an Affiliate Professor of the Department of Computer Science, Department of Urban and Regional Planning, and School of Information Sciences at the University of Illinois at Urbana-Champaign (UIUC). He has served as Founding Director of CyberGIS Center for Advanced Digital and Spatial Studies at UIUC since 2013. He served as Associate Director of the National Center for Supercomputing Applications (NCSA) for CyberGIS from 2010 to 2017, and Lead of NCSA’s Earth and Environment Theme from 2014 to 2017. He received a BS in computer engineering from Tianjin University, an MS in geography from Peking University, and an MS of computer science and a PhD in geography from the University of Iowa. He was a visiting scholar at Lund University sponsored by the National Science Foundation (NSF) in 2006, and NCSA Fellow in 2007. He received the NSF CAREER Award in 2009. He was named a Helen Corley Petit Scholar for 2011-12, and Centennial Scholar for 2013-16 by UIUC’s College of Liberal Arts and Sciences.

His research interests include geographic information science and systems (GIS), advanced cyberinfrastructure and cyberGIS, complex environmental and geospatial problems, computational and data sciences, high-performance and distributed computing, and spatial analysis and modeling. He has received research funding from a number of U.S. federal agencies (e.g., CDC, DOE, EPA, NASA, NSF, USDA, and USGS) and industry; and served as Principal Investigator (PI) for more than $15 million competitive research grants, and co-PI and investigator for contributing to sponsored research supported with tens of millions of U.S. dollars. He pioneered cyberGIS and has led several multi-institution interdisciplinary projects to advance cyberGIS and related scientific problem solving in agriculture, bioenergy, emergency management, geography and spatial sciences, geosciences, and public health. He has published 100+ peer-reviewed papers including articles in 30+ journals.

He has served as an Action Editor of GeoInformatica, Associate Editor of SoftwareX, and guest editor or editorial board member for multiple other journals, book series and proceedings. He served on the University Consortium for Geographic Information Science (UCGIS) Board of Directors from 2009 to 2012, and President of UCGIS from 2016 to 2017. He was a member of the Board on Earth Sciences and Resources of the U.S. National Academies of Sciences, Engineering, and Medicine from 2015 to 2017. He is serving on the advisory board of the NSF Extreme Science and Engineering Discovery Environment (XSEDE) program.

Michael F. Goodchild is Emeritus Professor of Geography at the University of California, Santa Barbara, where he also holds the title of Research Professor. He is also Distinguished Chair Professor at the Hong Kong Polytechnic University and Research Professor at Arizona State University, and holds many other affiliate, adjunct, and honorary positions at universities around the world. Until his retirement in June 2012 he was Jack and Laura Dangermond Professor of Geography, and Director of UCSB’s Center for Spatial Studies. He received his BA degree from Cambridge University in Physics in 1965 and his PhD in geography from McMaster University in 1969, and has received five honorary doctorates. He was elected member of the National Academy of Sciences and Foreign Member of the Royal Society of Canada in 2002, member of the American Academy of Arts and Sciences in 2006, and Foreign Member of the Royal Society and Corresponding Fellow of the British Academy in 2010; and in 2007 he received the Prix Vautrin Lud. He was editor of Geographical Analysis between 1987 and 1990 and editor of the Methods, Models, and Geographic Information Sciences section of the Annals of the Association of American Geographers from 2000 to 2006. He serves on the editorial boards of ten other journals and book series, and has published over 15 books and 500 articles. He was Chair of the National Research Council’s Mapping Science Committee from 1997 to 1999, and of the Advisory Committee on Social, Behavioral, and Economic Sciences of the National Science Foundation from 2008 to 2010. His research interests center on geographic information science, spatial analysis, and uncertainty in geographic data.