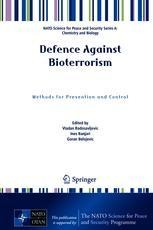 Methods for Prevention and Control

This volume is based on a multidisciplinary approach towards biological and chemical threats that can, and have been previously used in bioterrorism attacks around the globe. Current knowledge and evidence-based principles from the fields of synthetic biology, microbiology, plant biology, chemistry, food science, forensics, tactics, infective medicine, psychology and others are compiled to address numerous aspects and the complexity of bioterrorism attacks. The main focus is on biological threats, especially in the context of synthetic biology and its emerging findings that can be observed as possible threat and tool. The book examines microorganisms and their possible use in forensics, i.e. as possible detection tool that could enable fast and precise detection of possible treats. A number of plant derived components are also discussed as possible agents in bioterrorism attacks, and in relation to infectious disease pathology. Another integral part is food safety, especially in terms of large food supply chains, like airline caterings, institutionalized kitchens etc. Food can be observed as a possible mean of delivery of various agents (biological and chemical) for bioterrorism attacks. Steps on how to recognize specific critical points in a food supply chain, along with proposed corrective activities are discussed.

Examples from around the globe, along with the methodological approach on how to differentiate bioterrorism attacks from other epidemics are provided. However, epidemics are also discussed in the context of migrations, with the special emphasis on the current refugee migrations that affect not only Europe, but also the United States.

The book will be of interest to experts from various fields of science as well as professionals working in the field. The book encompasses examples and tools developed for easier, more specific, and faster detection of possible bioterrorism treats, along with proposed actions for some aspects of a bioterrorism attack.