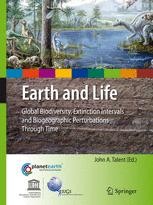 This volume focuses on the broad pattern of increasing biodiversity through time, and recurrent events of minor and major ecosphere reorganization. Intense scrutiny is devoted to the pattern of physical (including isotopic), sedimentary and biotic circumstances through the time intervals during which life crises occurred. These events affected terrestrial, lacustrine and estuarine ecosystems, locally and globally, but have affected continental shelf ecosystems and even deep ocean ecosystems. The pattern of these events is the backdrop against which modelling the pattern of future environmental change needs to be evaluated.

John Talent's degrees are from the University of Melbourne. After brief periods as UNESCO Professor at the University of Dhaka, and Caltech he taught at Macquarie University, Sydney, where he is now Emeritus Professor of Earth and Planetary Sciences. His fieldwork has been undertaken in many parts of southern and central Asia and Australia. He was President of the International Paleontological Association and is now a member of Geological Society of Australia and India.

“This volume is outstanding, and I have no hesitation in thoroughly recommending it. … John hand-picked the contributors, ensuring that (almost) all manuscripts sought for the volume were submitted in the required timeframe, reviewed, and edited to the highest standard. … This volume is amazingly good value considering the research that has gone into the chapters, and the editorial diligence that has resulted in such a high-quality monumental work. Encourage your institutional library to invest in the hardbound edition … .” (Ian Percival, Nomen Nudum, Issue 33, December, 2013)

“Earth and Life has hit the bookshelves! … All the included chapters are excellently written and provide a state-of-the-art insight into the various evolutionary phenomena observable, and the dynamics and interaction of fossil ecosystems. … This is clearly a ‘must have’ for Palaeontologists, Palaeobiologists and everyone interested in the evolutionary aspects of the development of life on our planet. It should also not be missed by university libraries … it’s simply too fascinating and inspiring!” (Michael Montenari, The Bulletin Your Magazine from the British Ecological Society, August, 2013)

“Seventy-four authors contributed to its thirty-six chapters, each a major figure in their own field. The result is a book with much to attract those with a general interest in palaeontology, those who are more specialized, and those who are concerned with biodiversity conservation. … The chapters in this extensively illustrated book provide an excellent opportunity for readers to compare extinction events.” (Geology Today, Vol. 28 (5), September-October, 2012)

“This huge volume was published as part of the UNESCO International Year of Planet Earth (IYPE) scientific programme, a joint initiative of UNESCO and the International Union of Geosciences. … The present volume is said to be aimed at Earth Science professionals and students. … There is a huge wealth of important material in the volume, which is a must for Earth Science libraries.” (Tony Wright, Geological Magazine, 2012)