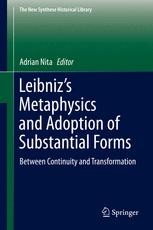 Between Continuity and Transformation

Between the end of his sejour at Paris (November 1676) and the first part of the Hanover period, Leibniz reformed his dynamics and began to use the theory of corporeal substance. This book explores a very important part of the philosophical work of the young Leibniz.

Expertise from around the globe is collated here, including Daniel Garber’s work based on the recent publication of Leibniz's correspondence from the late 1690s, examining how the theory of monads developed during these crucial years. Richard Arthur argues that the introduction of substantial forms, reinterpreted as enduring primitive forces of action in each corporeal substance, allows Leibniz to found the reality of the phenomena of motion in force and thus avoid reducing motion to a mere appearance.

Amongst other themes covered in this book, Pauline Phemister’s paper investigates Leibniz’s views on animals and plants, highlighting changes, modifications and elaborations over time of Leibniz’s views and supporting arguments and paying particular attention to his claim that the future is already contained in the seeds of living things. The editor, Adrian Nita, contributes a paper on the continuity or discontinuity of Leibniz’s work on the question of the unity and identity of substance from the perspective of the relation with soul (anima) and mind (mens).

Adrian Nita is Professor of Philosophy at University of Craiova (Romania) and managing editor of the Revue roumaine de philosophie. He is the author of La métaphysique du temps chez Leibniz et Kant (L’Harmattan, Paris, 2008).