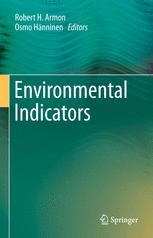 Environmental indicators are the first line of warning against hazards caused by humans or nature catastrophes to prevent diseases and death of living organisms. The present book covers a large variety of environmental indicators from physical-chemistry through economical, bioinformatics, electromagnetic irradiation and health aspects, all dealing with environmental pollution. This volume has been intended to environmentalists, engineers, scientists and policy makers as well to anybody interested in the latest development in the indicator field.

Prof. Robert Armon (born 2nd of March, 1952 in Bucarest, Romania) immigrated as a child with his parents to Israel in 1965. He under graduated in Biology and received his M.Sc. in environmental virology (at Hebrew University in Jerusalem, Israel). He received his D.Sc. in 1985 from the Faculty of Biotechnology and Food Engineering at Technion (Israel Institute of Technology). He performed Post-Doc research (1985-1988) at University of Rhode-Island, USA and at Institute Armand-Frappier, University of Québec, Canada. Since 1994 he is a faculty member at Civil and Environmental Engineering Faculty (Technion, Israel) teaching and studying environmental microbiology (main subject-bacteriophages as viral pollution indicators). He is a member in many microbiological and water societies such as ASM, ISM, IWA and ISEI, board member in several scientific journals and reviewer. He published over 89 scientific papers, 10 book chapters, has 7 patents and recently published the book "Environmental aspects of zoonotic diseases" (IWA Press, 2012), co-authored with his colleague Dr. Uta Cheruti. He is a father of five and grandfather of three grandchildren.

Prof. Em. Hänninen Osmo Otto Päiviö, (born 30 April 1939 in Lahti, Finland) is a Finnish scientist and physiologist, a non-fiction writer, opinion-maker, a supporter of the folk medicine, culture and a humanist. He served as rector of the University of Kuopio, 1981–1984, Vice Rector 1973-78, and was appointed to the first permanent professor post of the university as the Professor of Physiology and acted as the head of the institute 1972-2004. Hänninen also served as an adjunct professor at the University of Turku and the University of Joensuu, (1967–2004 and 1981–2004) and research professor of the Academy of Finland 1980-81. He has published more than 400 scientific journal articles in physiology, toxicology, biochemistry, sports medicine, environmental sciences and pharmacology and numerous textbooks and books of cultural history in Finnish, English, Swedish and Estonian. He is also the current editor-in-chief of the journal Pathophysiology, and was also the president of the 3rd International Congress on Pathophysiology. The most noteworthy of the text books is the one on human physiology and anatomy (in Finnish), which in 2014 becomes the oldest continuously used textbook in Finland. In 2009 he won the Finnish Association of Non-fiction Writers's price for textbook writers.