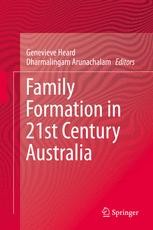 This book provides a detailed, up-to-date snapshot of Australian family formation, answering such questions as ‘what do our families look like?’ and ‘how have they come to be this way?’ The book applies sociological insights to a broad range of demographic trends, painting a comprehensive picture of the changing ways in which Australians are creating families.

The first contemporary volume on the subject, Family Formation in 21st Century Australia chronicles significant changes in partnering and fertility. In the late 20th century, cohabitation, divorce and births outside marriage rose dramatically. Yet family formation patterns continue to evolve, requiring fresh analysis. Even since the turn of the century, divorce has stabilized and fertility has increased.

Using information from the 2011 Australian Census and from large-scale surveys, leading Australian academics dissect recent trends in cohabitation, ‘living apart together’, marriage, interethnic partnering, relationship dissolution, repartnering, contraceptive use and fertility. Since there is more diversity in family formation patterns than ever before, the book also considers differences between groups within the Australian population. Which groups are more likely to marry, cohabit or have higher fertility? And how do patterns differ among indigenous, migrant or same sex attracted Australians?.