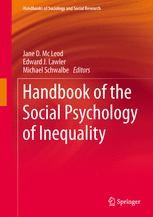 Handbook of the Social Psychology of Inequality

Jane D. McLeod is Associate Dean for Social and Historical Sciences and Graduate Education and Professor of Sociology, at Indiana University. Her research considers health as both cause and consequence of inequality with special attention to life course considerations. She has co-edited two other volumes for Springer: Mental Health, Social Mirror (with William R. Avison and Bernice A. Pescosolido) and the Handbook of the Sociology of Health, Illness and Healing (with Bernice A. Pescosolido, Jack K. Martin, and Anne Rogers). She also co-edited The Sociology of Mental Illness: A Comprehensive Reader (with Eric R. Wright) for Oxford University Press. In 2014, she received the Leonard I. Pearlin Award for Distinguished Contributions to the Sociological Study of Mental Health from the Mental Health section of the American Sociological Association.

Michael Schwalbe received his Ph.D. in sociology in 1984 from Washington State University. His research and writing have focused on how self-concept formation and identity work are implicated in the reproduction of inequality. His books include Unlocking the Iron Cage: The Men’s Movement, Gender Politics and American Culture; The Sociologically Examined Life; Remembering Reet and Shine: Two Black Men, One Struggle; Rigging the Game: How Inequality Is Reproduced in Everyday Life; and, most recently, Manhood Acts: Gender and the Practices of Domination. He is currently professor of sociology at North Carolina State University.

Edward J. Lawler is the Martin P. Catherwood Professor of Industrial and Labor Relations and Professor of Sociology at Cornell University. His teaching and research areas are group processes, exchange, power, negotiation and the sociology of emotion. He has co-authored three books and edited or co-edited the annual series, Advances in Group Processes. In 2001, he received the Cooley-Mead Award for career achievement from