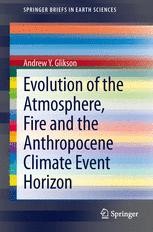 Evolution of the Atmosphere, Fire and the Anthropocene Climate Event Horizon

Unique among all creatures, further to the increase in its cranial volume from Australopithecus to Homo sapiens, the use of tools and cultural and scientific creativity, the genus Homo is distinguished by the mastery of fire, which since about two million years ago has become its blueprint.  Through the Holocene and culminating in the Anthropocene, the burning of much of the terrestrial vegetation, excavation and combustion of fossil carbon from up to 420 million years-old biospheres, are leading to a global oxidation event on a geological scale, a rise in entropy in nature and the sixth mass extinction of species.

Andrew Glikson, an Earth and paleo-climate scientist, studied geology at the University of Jerusalem and graduated at the University of Western Australia in 1968. He conducted geological surveys of the oldest geological formations in Australia, South Africa, India and Canada, studied large asteroid impacts, including effects on the atmosphere and oceans mass extinction of species. Since 2005 he studied the relations between climate and human evolution. He was active in communicating nuclear issues and climate change evidence to the public and parliamentarians through papers, lectures and conferences.

"This book is a welcome and refreshing addition to the literature of Archaean geology. It provides pithy and up to date information on the great Archaean terrains and presents a scheme of evolution of the early crust, from mafic-ultramafic crust to tonalite-trondhjemite-greenstone crust to greenstone-granite and high-grade metamorphic crust." (Professor Hugh Davies, University of New Guinea, March 2014)

"Andrew Glikson has presented an excellent synthesis relating to the history of the early earth being an up to date compilation & evaluation of the status of our knowledge on this subject. This synthesis is made all the more significant in that the author is a well versed scientist having made many contributions to Archaean geology & meteorite impact structures through numerous publications in peer reviewed journals. ... It has been a pleasure to read this draft of the manuscript & once printed will enjoy the status of being grouped within the reference category of my library." (Professor John Ferguson, former professor at the University of Witwatersrand and Chief Scientist at the Australian Geological Survey Organization, March 2014)

"This book deals with the very first third of our planet’s long history covering all the major episodes as deciphered from the scattered rocks in all four corners of the Earth. Written by Andrew Glikson – a passionate sleuth of all earth sciences involving decades of field and laboratory investigations – has produced a grand modern overview of the Hadean and Archaean Earth. ... Glikson challenges the totally uniformitarian theories of Earth history by adding the clear evidence of catastrophic events like asteroide impacts as an important, even an essential, factor in our environmental and organic evolution." (Professor Vic Gostin, University of Adelaide, March 2014)

"The manuscript written by Dr. A. Glikson is concerned with the early history of the Earth and the applicability of the uniformitarian doctrine for its interpretation, that is, an essential question for modern geological science. ... Publication of this manuscript will be a valuable contribution to the Earth’s sciences." (Professor Victor Masaitis, Karpinski Geological Institute (Russia), March 2014)

"I think it is something of a magnum opus; it summarizes a great deal of what we know about Archaean geology. It will be an essential reference to anyone involved in studying Archaean terranes world-wide, from whatever perspective: geochemical, isotopic, structural, etc. Of particular significance is its non-uniformitarian approach, emphasizing the likely importance of impact events on early Earth history. Congratulations on producing such an impressive volume." (Dr John Sheraton, specialist in the study of igneous and high grade metamorphic terrains, March 2014)

"When I read Andrew Glikson’s new book the famous Russell–Einstein Manifesto, published in 1955 in the midst of the Cold War, came to my mind. In this manifesto, Bertrand Russell, Albert Einstein and the other distinguished signatories point to the massive dangers of nuclear weapons and call for peaceful solutions, while stating: ‘‘Many warnings have been uttered by eminent men of science. We have not yet found that the views of experts on this question depend in any degree upon their politics or prejudices. They depend only upon the extent of the particular expert’s knowledge. We have found that the men who know most are the most gloomy’’. Indeed, Andrew Glikson shares an enormous wealth of knowledge with us, putting anthropogenic climate change in the context of the Earth’s and mankind’s (common) history. This book is full of facts derived from the recent scientific literature, which are woven into the fabric of a gripping narrative. A narrative—given the weight of evidence—that may turn out to have a dark end. As a reader we sit in a space craft watching the planet revolve around the sun. We look 3.5 billion years into the past to follow the evolution of the atmosphere, the origin of life, its rise and decline, and, finally, the most recent appearance of man. Ultimately, Andrew Glikson asks us to ponder the destiny of our own species, which has the intelligence and the ingenuity to put us into space, and also the power to destroy ourselves." (Hans Joachim Schellnhuber, Director of the Potsdam Institute for Climate Impact Research (PIK), September 3, 2013)