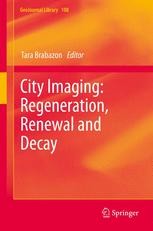 This book examines the paradoxes, challenges, potential and problems of urban living.  It understands cities as they are, rather than as they may be marketed or branded. All cities have much in common, yet the differences are important.  They form the basis of both imaginative policy development and productive experiences of urban life.

The phrase ‘city imaging’ is often used in public discourse, but rarely defined.   It refers to the ways that particular cities are branded and marketed. It is based on the assumption that urban representations can be transformed to develop tourism and attract businesses and in-demand workers to one city in preference to another. However, such a strategy is imprecise. History, subjectivity, bias and prejudice are difficult to temper to the needs of either economic development or social justice.

The taste, smell, sounds and architecture of a place all combine to construct the image of a city. For researchers, policy makers, activists and citizens, the challenge is to use or transform this image. The objective of this book is to help the reader define, understand and apply this process.

After a war on terror, a credit crunch and a recession, cities still do matter. Even as the de-territorialization of the worldwide web enables the free flow of money, music and ideas across national borders, cities remain important. City Imaging: Regeneration, Renewal, Decay surveys the iconography of urbanity and explores what happens when branding is emphasized over living.