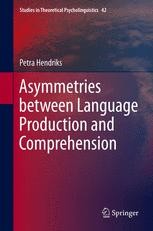 Asymmetries between Language Production and Comprehension

This book asserts that language is a signaling system rather than a code, based in part on such research as the finding that 5-year-old English and Dutch children use pronouns correctly in their own utterances, but often fail to interpret these forms correctly when used by someone else.

Emphasizing the unique and sometimes competing demands of listener and speaker, the author examines resulting asymmetries between production and comprehension. The text offers examples of the interpretation of word order and pronouns by listeners, and word order freezing and referential choice by speakers. It is explored why the usual symmetry breaks down in children but also sometimes in adults.

“Through a lucid, comprehensive review of acquisition studies on reference-related phenomena, Petra Hendriks builds a striking case for the pervasiveness of asymmetries in comprehension/production. In her view, listeners systematically misunderstand what they hear, and speakers systematically fail to prevent such misunderstandings. She argues that linguistic theory should take stock of current psycholinguistic and developmental evidence on optionality and ambiguity, and recognize language as a signaling system. The arguments are compelling yet controversial: grammar does not specify a one-to-one correspondence between form and meaning; and the demands of the mapping task differ for listeners and speakers. Her proposal is formalized within optimality theory, but researchers working outside this framework will still find it of great interest. In the language-as-code vs. language-as-signal debate, Hendriks puts the ball firmly in the other court.” Ana Pérez-Leroux, University of Toronto, Canada