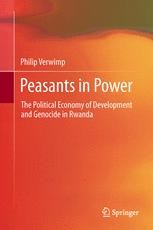 The Political Economy of Development and Genocide in Rwanda

This book shows how Rwanda’s development model and the organisation of genocide are two sides of the same coin. In the absence of mineral resources, the elite organised and managed the labour of peasant producers as efficient as possible. In order to stay in power and benefit from it, the presidential clan chose a development model that would not change the political status quo. When the latter was threatened, the elite invoked the preservation of group welfare of the Hutu, called for Hutu unity and solidarity and relied on the great mass (rubanda nyamwinshi) for the execution of the genocide. A strategy as simple as it is horrific. The genocide can be regarded as the ultimate act of self-preservation through annihilation under the veil of self-defense.

Based on more than ten years of research, and engaging with competing and complementary arguments of authors such as Peter Uvin, Alison Des Forges, Scott Strauss, René Lemarchand, Filip Reyntjens, Mahmood Mamdani and André Guichaoua, the author blends economics, politics and agrarian studies to provide a new way of understanding  the nexus between development and genocide in Rwanda. Students and practitioners of development as well as everyone interested in the causes of violent conflict and genocide in Africa and around the world will find this book compelling to read.

''This book will make a major impact not only on the scholarship of the Rwandan genocide but also on our knowledge of agrarian societies and their susceptibility in times of economic crisis to state or elite manipulation, particularly those societies that are densely-populated, smallholder-dominated, and ethnically divided. It is a striking intervention on a topic of global concern that is not likely to diminish in the future, given current trends of population growth, resource exhaustion, ecological crisis, ethnopolitical polarization, and proliferation of weaponry." (Ben Kiernan, A.Whtiney Griswold Professor of History, professor of international and areas studies and founding director of the Genocide Studies Program at Yale University, author of Blood and Soil)

"Rather than an act of inter-ethnic madness, this books shows how the Rwandan genocide emanated directly from the development path the country had chosen after independence. Verwimp's argument brings genocide into the study of development in the same way that Barrington Moore's integrated democracy into it. Indeed in a sense he has provided us with a new "path into the modern world". (James A.Robinson, Florence Professor of Government at Harvard University, co-author of Why Nations Fail and the Economic Origins of Dictatorship and Democracy)

"For everyone willing to understand how apparently kind and calm people can suddenly lead their society to a nightmarish descent into chaos and genocidal killings, reading "Peasants in Power" will be an invaluable step. The author has worked for more than ten years on the issue and is now a world expert in the field". (Jean-Philippe Platteau, Professor of Development Economics in Namur and at the Centre for the Study of African Economies, Oxford University, author of Institutions, Social Norms and Economic Development)

“Philip Verwimp's deeply researched book is an important addition to the growing body of literature on the Rwandan genocide addressing its complex dynamics of violence. Verwimp explores the entanglement between the developmental state, the institutions of the regime and ordinary Rwandans "in the hills". He shows how the emergence of specific moral 'reference frames' is intricately linked to the political and economic set-up. The book deserves a wide reading among scholars and practitioners interested in African politics, economics, and genocide more generally” (Anna-Maria Brandstetter, Phd in Anthropology and Senior Researcher at the Center for African Studies, Johannes Gutenberg University, Mainz, author of Die Rhetorik von Reinheit, Gewalt und Gemeinschaft: Bürgerkrieg und Genozid in Rwanda)