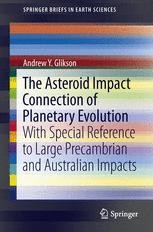 With Special Reference to Large Precambrian and Australian impacts

When in 1981 Louis and Walter Alvarez, the father and son team, unearthed a tell-tale Iridium-rich sedimentary horizon at the 65 million years-old Cretaceous-Tertiary boundary at Gubbio, Italy, their find heralded a paradigm shift in the study of terrestrial evolution.  Since the 1980s the discovery and study of asteroid impact ejecta in the oldest well-preserved terrains of Western Australia and South Africa, by Don Lowe, Gary Byerly, Bruce Simonson, Scott Hassler, the author and others, and the documentation of new exposed and buried impact structures in several continents, have led to a resurgence of the idea of the catastrophism theory of Cuvier, previously largely supplanted by the uniformitarian theory of Hutton and Lyell. Several mass extinction of species events are known to have occurred in temporal proximity to large asteroid impacts, global volcanic eruptions and continental splitting. Likely links are observed between asteroid clusters and the 580 Ma acritarch radiation, end-Devonian extinction, end-Triassic extinction and end-Jurassic extinction. New discoveries of ~3.5 – 3.2 Ga-old impact fallout units in South Africa have led Don Lowe and Gary Byerly to propose a protracted prolongation of the Late Heavy Bombardment (~3.95-3.85 Ga) in the Earth-Moon system. Given the difficulty in identifying asteroid impact ejecta units and buried impact structures, it is likely new discoveries of impact signatures are in store, which would further profoundly alter models of terrestrial evolution.

“Congratulations, Andrew, this volume really captures the science, its multiple facets, and, for your many colleagues, what can be accomplished during a dedicated career.”

“It is a pleasure to see that the record of asteroidal impacts (including probable sites) and their geological effects on our planet has been thoroughly documented in this latest book by Andrew Glikson. While this compilation is likely to represent just the "tip of the iceberg" of the full impact related geology, it nevertheless creates a better wholistic view of this phenomenon, than previous publications.”

“The paper is a very ambitious summary of many of the key subjects related to the role of impacts in geologic history and, in the end, presents an argument that impacts have driven many of the large-scale events of geologic history, from crustal to biological evolution.”

“This monograph is a brilliant synopsis of the role over geological time of asteroid impacts on the evolution of planet Earth.” … “ Dr Glikson, is not just an expert on the topic of asteroid impacts, he has consistently, and rightly so, advocated for some 40 years that large asteroid impacts may have had an important, if not primary, role in shaping the tectonics of Hadean and Palaeoarchean times. Indeed, in the early years of his work on asteroids and their function in Archaean tectono-thermal events, Glikson was well ahead of his time. In this monograph Glikson has expertly assembled what is known, poorly known and yet to come, our understanding of asteroid impacts and links with planetary evolution.”

“Glikson is extremely well qualified for the task of compiling a monograph on the effects of asteroid impacts. Over almost 50 years as a geoscientist, he has personally studied numerous impact structures and has published an exceptionally large amount of information on Precambrian crustal evolution.”

“Andrew Glikson has been mentored by none other than the late Gene Shoemaker and Robert Dietz, founding fathers of modern impact cratering research. The book covers the full breadth of impact-related studied, from the microscopic to the megascopic, and from both a planetary and terrestrial perspective, while focusing in on the important Australian contributions to this exciting and evolving field - contributions that he himself can lay some claim to.”