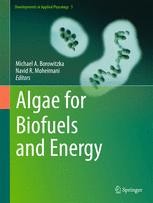 Algae for Biofuels and Energy

Microalgae are one of the most studied potential sources of biofuels and bioenergy. This book covers the key steps in the production of renewable biofuels from microalgae - strain selection, culture systems, inorganic carbon utilisation, lipid metabolism and quality, hydrogen production, genetic engineering, biomass harvesting, extraction.  Greenhouse gas and techno-economic modelling are reviewed as is the 100 year history of microalgae as sources of biofuels and of commercial-scale microalgae culture. A summary of relevant basic standard methods used in the study of microalgae culture is provided. The book is intended for the expert and those starting work in the field.​

Michael Borowitzka is Professor of Marine Phycology and Director of the Algae R&D Centre at Murdoch University and has been working on the commercial production of microalgae for over 25 years since obtaining his PhD at the University of Sydney. He is recognised internationally as a leading authority in this field. He was part of the team which developed and commercialised the production of β-carotene from the alga Dunaliella salina, responsible for the pilot plant design, construction and operation. The process was commercialised in the late 1980s at Hutt Lagoon, Western Australia and the current production plant, now owned and operated by Cognis, is the largest microalgae production plant in the world. Before coming to Murdoch University Michael was Head of Biology at the Roche Research Institute of Marine Pharmacology, working on drug discovery from marine organisms.  He consults on microalgae projects for industry, the World Bank and FAO in Australia, Chile, UK, Italy, USA, China, Cuba and other countries. In 2010 Michael and his team commissioned the first algae biofuels plant in Australia in Karratha, WA. Currently he is the Editor-in-Chief of the Journal of Applied Phycology, and convenor of the BEAM (Biotechnological and Environmental Applications of Microalgae) Research Network and the BEAM-RIRDC Algae Biofuels group, and President elect of the International Phycological Society. He was the founding President of the Asia-Pacific Society of Applied Phycology, immediate past President of the International Society of Applied Algology, Chair of the WA Branch of the Australian Biotechnology Association for 10 years He also has wide commercial experience and e has worked in senior positions in industry, is a Fellow of the Australian Institute of Company Directors and is on the board of several companies.

“This book provide a realistic assessment of the current state and the potential of biofuel production from algae. … due to the logical arrangement of the chapters and the provision of a wealth of information, and also practical aspects that must be considered in algae cultivation and processing, this book merits a strong recommendation. Moreover, the very realistic assessment of the current state of research and development of biofuel production from algae helps to focus on those aspects which need further engagement.” (Torsten Jakob, Journal of Plant Physiology, Vol. 170 (14), September, 2013)

“This well-produced hardbound book is concerned with microalgae as sources of biofuels. The book consists of 16 chapters contributed by 46 authors from 8 countries. … Most chapters are supported by extensive citations to the original literature. Overall, the book is useful.” (Yusuf Chisti, Biotechnology Advances, Vol. 31, 2013)