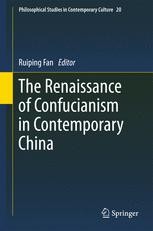 The Renaissance of Confucianism in Contemporary China

Under the clear and thoughtful editorship of Ruiping Fan, The Renaissance of Confucianism in Contemporary China provides new and highly substantive insights into the emergence of a renewed, relevant, and perceptively engaged Confucianism in 21st century China. Through the vibrantly diverse essays contained in this volume, and in cogent overview through Fan’s introduction, one learns that Confucianism is thoroughly misunderstood, if it is seen only through Western lenses. It cannot be absorbed into that rights-based “global” discourse that has been the West’s troubled inheritance from the Enlightenment. Extraordinarily thoughtful Chinese voices are found in this volume that converse with each other in serious and revealing ways. Should genuine exchange continue to develop between Western thinkers and Chinese Confucians, The Renaissance of Confucianism in Contemporary China will surely be an indispensable pathway into those core issues, moral and social, that will unavoidably be encountered as China and the West advance further into the 21st century.

Stephen A. Erickson, Professor of Philosophy and the E. Wilson Lyon Professor of the Humanities, Pomona College, USA

This is the most important recent study of Chinese culture and political theory. It offers a rich insight into the renaissance of authentic Confucian commitments in contemporary China and the foundationally different moral and political direction that it proposes for China’s future. The essays Fan brings together tie the power of China’s rich past to the prospect of a China quite different from what the West envisages. It is a “must-read” for anyone seeking to understand China in the 21st century.

David Solomon, W.P. and H.B. White Director of the Center for Ethics and Culture, University of Notre Dame

“The book provides interesting (and to some degree emic) insights into a newly emerged Chinese school of thought which strives to restore Confucianism’s political applicability in the twenty-first century. In short, readers will find here a valuable introduction to a provocative and increasingly important branch of contemporary Confucianism.” (Lukas Pokorny, Religious Studies Review, Vol. 38 (4), December, 2012)