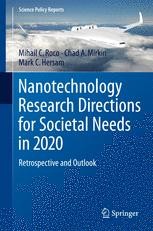 This volume presents a comprehensive perspective on the global scientific, technological, and societal impact of nanotechnology since 2000, and explores the opportunities and research directions in the next decade to 2020.  The vision for the future of nanotechnology presented here draws on scientific insights from U.S. experts in the field, examinations of lessons learned, and international perspectives shared by participants from 35 countries in a series of high-level workshops organized by Mike Roco of the National Science Foundation (NSF), along with a team of American co-hosts that includes Chad Mirkin, Mark Hersam, Evelyn Hu, and several other eminent U.S. scientists.  The study performed in support of the U.S. National Nanotechnology Initiative (NNI) aims to redefine the R&D goals for nanoscale science and engineering integration and to establish nanotechnology as a general-purpose technology in the next decade. It intends to provide decision makers in academia, industry, and government with a nanotechnology community perspective of productive and responsible paths forward for nanotechnology R&D.

“Nanotechnology Research Directions for Societal Needs in 2020 is a wonderful piece of work. This book reflects the bible for nanotechnology for the next decades for the whole world.  Well done.”  (Prof. Marcel van de Voorde, Delft University of Technology, Delft, November 2010)

"This book provides a comprehensive vision and an overarching roadmap for the nanotechnology community. It comes at a great time as we move into the next decade of nano-enabled commercialization."  (Vincent Caprio, Executive Director, NanoBusiness Commercialization Association, November 2010).

“Some of these [nanotechnology] research goals will take 20 or more years to achieve. But that is why there is such a critical role for the federal government.” (President Bill Clinton, Speech announcing NNI at Caltech, January 2000)

Dr. Mihail C. Roco is the Senior Advisor for Nanotechnology at the National Science Foundation (NSF) and a key architect of the National Nanotechnology Initiative. Dr. Roco is the founding Chair of the U.S. National Science and Technology Council’s Subcommittee on Nanoscale Science, Engineering and Technology (NSET) and established the Nanotechnology Group of the International Risk Governance Council. Prior to joining National Science Foundation, he was Professor of mechanical and chemical engineering. Dr. Roco is credited with thirteen patents, contributed over two hundred archival articles in sixteen books including recently "Managing Nano-Bio-Info-Cognition Innovations" (2007) and "Mapping Nanotechnology Knowledge and Innovation: Global and Longitudinal Patent and Literature Analysis" (2009). Dr. Roco is a corresponding member of the Swiss Academy of Engineering Sciences and member of the International Risk Governance Council. His research included experimental and simulation methods to investigate nanosystems. He formally proposed the National Nanotechnology Initiative (NNI) in a presentation at White House/OSTP, Committee on Technology, on March 11, 1999. He conducted research, teaching, consulting to industry, and international organizations in the Americas, Europe, Japan, and Australia. He is a Fellow of ASME, Fellow of AIChE and Fellow of the Institute of Physics, and was elected as Engineer of the Year by the U.S. Society of Professional Engineers and NSF in 1999 and again in 2004. He was honored as recipient of the Carl Duisberg Award in Germany, "Burgers Professorship Award" in Netherlands, the "University Research Professorship" and Fingerson/TSI awards in the U.S. He received the National Materials Advancement Award from the Federation of Materials Societies in 2007 "as the individual most responsible for support and investment in nanotechnology by government, industry, and academia worldwide." Dr. Chad Mirkin received his undergraduate training at Dickinson College (B.S., 1986) and his graduate training at the Pennsylvania State University where he completed his Ph.D. in chemistry in 1989. That same year he moved to the Massachusetts Institute of Technology as a National Science Foundation Postdoctoral Fellow. Mirkin joined the faculty at Northwestern University in 1991 as an Assistant Professor in Chemistry. In 1997 he was named Charles E. and Emma H. Morrison Professor of Chemistry. His current positions are the George B. Rathmann Professor of Chemistry, Professor of Materials Science and Engineering, Professor of Medicine, and Director of the NU International Institute for Nanotechnology (IIN). Mirkin has won numerous awards for his research in these areas, including: the NIH Director’s Pioneer Award, the Collegiate Inventors Award from the National Inventors Hall of Fame (2003, 2004), the ACS Nobel Signature Award, the Raymond and Beverly Sackler Prize in the Physical Sciences, the Feynman Prize, the Leo Hendrik Baekeland Award, Crain’s Chicago 40 under 40 Award, the ACS Award in Pure Chemistry, the Discover 2000 Innovation of the Year Award, the Materials Research Society’s Outstanding Young Investigator Award, the E. Bright Wilson Prize, the Phi Lambda Upsilon Fresenius Award, a Beckman Young Investigator Award, a NSF Young Investigator Award, an A. P. Sloan Foundation Fellowship, an ONR Young Investigator Award, a DuPont New Professor Award, and a Camille Dreyfus Teacher-Scholar Award. Recently, he was elected as a fellow of the AAAS. In 1997, he was corecipient of a prestigious BF Goodrich Collegiate Inventors Award for one of the three most outstanding collegiate inventions in all of medicine, science, and engineering. He holds an honorary doctorate from Dickinson College, and was elected to the school’s Board of Trustees in 2005. Professor Mirkin is the author or coauthor of over 280 publications and 313 patents (55 issued). He serves on the editorial advisory board of 19 scholarly journals, and is an active consultant with several major chemical companies. In addition, he is a founder of two companies, Nanosphere and NanoInk, and cofounder of the journal, Small. Dr. Mark C. Hersam is currently a Professor of Materials Science and Engineering and a Professor of Chemistry at Northwestern University. He earned a B.S. in Electrical Engineering from the University of Illinois at Urbana-Champaign (UIUC) in 1996, M.Phil. in Physics from the University of Cambridge in 1997, and a Ph.D. in Electrical Engineering from UIUC in 2000. In 1999, he also performed research at the IBM T. J. Watson Research Laboratory under the support of an IBM Distinguished Fellowship. His research interests include single molecule chemistry, nanofabrication, scanning probe microscopy, semiconductor surfaces, and carbon nanomaterials. As a faculty member, Dr. Hersam has received several awards including the Beckman Young Investigator Award, NSF CAREER Award, ARO Young Investigator Award, ONR Young Investigator Award, Sloan Research Fellowship, Presidential Early Career Award for Scientists and Engineers, TMS Robert Lansing Hardy Award, AVS Peter Mark Award, ECS SES Research Young Investigator Award, MRS Outstanding Young Investigator Award, and four Teacher of the Year Awards. In recognition of his early career accomplishments, Dr. Hersam was directly promoted from assistant professor to full professor with tenure in 2006. In 2007, Dr. Hersam co-founded NanoIntegris, which is a start-up company focused on supplying high performance carbon nanomaterials.