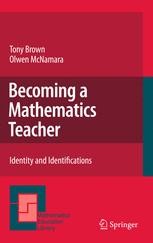 This book is about people preparing to teach mathematics to children in the first half of their schooling. It is also about what mathematics becomes in a school context responding to insistent demands to raise standards. The book asks how aspirant teachers begin to think of themselves as teachers, and about mathematics in particular, when they have many years of experience as pupils in school behind them, which did not always leave a positive image of mathematics. How do they change how they are, or even who they are, as they proceed through a teacher education programme into their first teaching post, where mathematics is just one of many subjects to be taught? They will encounter diverse and complex social demands that cannot necessarily be reconciled, since the work of schools is targeted at enabling pupils to participate in a rapidly changing world where consensus on educational objectives seems difficult to achieve.  Conflicting priorities can result in teachers being pulled in many directions, where their personal aspirations confront an official story that portrays the journey into teaching as a sequence of criteria to be fulfilled. Centred on over 200 hours of interview data from government-funded studies directed by the authors the book documents teachers over a five-year period, from the outset of their training to the end of their first year of teaching in a school. These interviews coincided with a major national curriculum initiative that through prescriptive and detailed regulation set the characteristics of a good teacher and the content of mathematics to be taught. Aimed primarily at teacher educators the book will also appeal to researchers across the field of education for its unique theoretical perspective drawing on contemporary psychoanalytical theory in portraying the identities that teachers come to occupy, and the forms of mathematics with which they identify. It also presents a vivid account of what educational policy implementation looks like through the voices of teachers building their practices.

Tony Brown
Tony is Professor of Mathematics Education at Manchester Metropolitan University. Originally from London, Tony trained in Canterbury and Exeter before returning to London where he taught mathematics for three years at Holland Park School. This was followed by three years as a mathematics teacher educator for Volunteer Service Overseas in Dominica in the Caribbean. In 1987, he completed his PhD at Southampton University. His doctoral research focused on language usage in mathematics classrooms, especially where the fluent use of English could not be assumed. After a spell as mathematics coordinator in a middle school in the Isle of Wight, Tony moved to Manchester Metropolitan University. Tony has headed the doctoral programme in education and participated in a range of other courses; he became a professor in 2000. Projects have included: Economic and Social Research Council-funded studies examining teacher education; piloting a distance-teaching programme enabling British volunteers based in Africa to research their own teaching practice within a programme of professional development; a General Medical Council-funded project on how senior doctors learn; and leading a team of emergency medicine doctors carrying out professionally focused research. Tony also spent two years on leave from Manchester at the University of Waikato where he became the first Professor of Mathematics Education in New Zealand. There he led a project funded by the New Zealand Council for Educational Research on Pasifika teachers working in New Zealand Schools. Tony has published two other books in Springer’s Mathematics Education Library series. Mathematics Education and Language, first published in 1997, outlines his interest in mathematics in schools. A revised second edition appeared in 2001. Mathematics Education and Subjectivity (forthcoming) explores mathematical learning from the perspective of contemporary social theory. Meanwhile, Tony has also co-authored, with Liz Jones, Action Research and Postmodernism, which explores how teachers might carry out practitioner research within higher degrees. Regulative Discourses in Education: A Lacanian Perspective, co-authored with Dennis Atkinson and Janice England, offers an analysis of teacher practices through psychoanalytic theory. The Psychology of Mathematics Education, which he edited, introduces psychoanalytic theory as an alternative to more cognitive understandings of psychology. Tony has also written extensively in journals such as Educational Studies in Mathematics, For the Learning of Mathematics and the British Educational Research Journal.

Olwen McNamara
Olwen is Professor of Teacher Education and Development at the University of Manchester; she has lived and worked in and around Manchester most of her life. Her first degree was in mathematics, which she subsequently taught for over twenty years; she later combined teaching with bringing up a family and studying for a PhD at Manchester Metropolitan University. After completing her thesis in 1996, she worked at Manchester Metropolitan University as an educational researcher and also managed a research-based partnership of local schools, Local Authorities and Universities. She moved to the University of Manchester in 2002, where her main management role was initially in teacher education. She is currently Director of Initial Teacher Education and Director of Post Graduate Research at the University. Olwen’s research interests are in the area of teacher professional learning, and she has a special interest in mathematics education, social justice and practitioner research. She has undertaken research projects for funders including the Economic and Social Research Council, the Nuffield Foundation, the Training and Development Agency, The Department for Education, the National College and NASUWT—the teachers’ union. She has authored a number of reports for these funders and published widely in international journals. Her previous books include Becoming an Evidence-Based Practitioner and Practitioner Research and Professional Development in Education, which she co-authored with Anne Campbell and Peter Gilroy. She has served on a number of national committees, including the British Educational Research Association Council, where she was chair of the conference committee for a number of years, and the Research and Development Committee of the Universities’ Council for the Education of Teachers, where she is Vice Chair.

“The defining feature of Becoming a mathematics teacher: Identity and identifications is in the way it engages with the concept of identity by locating itself squarely within contemporary social theory. … Becoming a mathematics teacher: Identity and identifications is certain to stimulate reflection and discussion. … a vehicle for transformative potential for teacher education, just as much as it is a means to uncovering terrains of struggle. Teacher educators can use the narratives of prospective and beginning teachers to promote more equitable forms of organisation.” (Margaret Walshaw, Journal of Mathematics Teacher Education, Vol. 15, 2012)