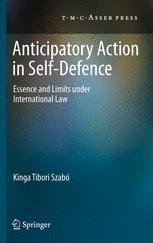 Essence and Limits under International Law

The legality of preemptive strikes is one of the most controversial questions of contemporary international law. At the core of this controversy stands the temporal dimension of self-defence: when and for how long can a state defend itself against an armed attack? Can it resort to armed force before such an attack occurs? Is anticipatory action covered by the rules of self-defence or should it be treated as a different concept?

This book examines whether anticipatory action in self-defence is part of customary international law and, if so, under what conditions. The pre-Charter concept of anticipatory action is demarcated and then assessed against post-Charter state practice. Several instances of self-defence – both anticipatory and remedial – are examined to elucidate the rules governing the temporal dimension of the right. The Six-Day War (1967), the Israeli bombing of an Iraqi reactor (1981), the US invasion of Iraq (2003) and other instances of state practice are given thorough attention.

The innovative mark of this book is its comprehensive focus on the temporal dimension and, particularly, the anticipatory aspect of self-defence. By way of conclusion, the definition and limits of anticipatory action in self-defence are incorporated into an accessible formula.

The book is highly recommended to academics and legal advisers – ministries of foreign affairs and defence – as well as to international organizations, military academies and journalists.

Kinga Tibori Szabó is presently working at the International Criminal Tribunal for the Former Yugoslavia, The Hague, The Netherlands.

With a Foreword by Pieter H. Kooijmans, former judge in the International Court of Justice