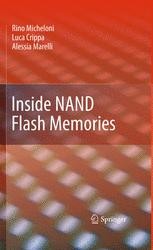 To realize how much NAND Flash memories pervade every aspect of our life, just imagine how our recent habits would change if the NAND memories suddenly disappeared. To take a picture it would be necessary to find a film (as well as a traditional camera…), disks or even magnetic tapes would be used to record a video or to listen a song, and a cellular phone would return to be a simple mean of communication rather than a multimedia console.

The development of NAND Flash memories will not be set down on the mere evolution of personal entertainment systems since a new killer application can trigger a further success: the replacement of Hard Disk Drives (HDDs) with Solid State Drives (SSDs).

SSD is made up by a microcontroller and several NANDs. As NAND is the technology driver for IC circuits, Flash designers and technologists have to deal with a lot of challenges. Therefore, SSD (system) developers must understand Flash technology in order to exploit its benefits and countermeasure its weaknesses.

Inside NAND Flash Memories is a comprehensive guide of the NAND world: from circuits design (analog and digital) to Flash reliability (including radiation effects), from testing issues to high-performance (DDR) interface, from error correction codes to NAND applications like Flash cards and SSDs.