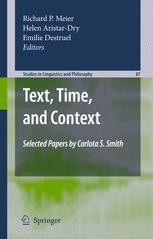 Carlota S. Smith was a key figure in linguistic research and a pioneering woman in generative linguistics. This selection of papers focuses on the research into tense, aspect, and discourse that Smith completed while Professor of Linguistics at the University of Texas at Austin. Smith, who died in 2007, was a trailblazer in her field whose broad interests fed into her scholarly research.

Selected by Carlota Smith herself and by her longtime friends and colleagues, this book contains her 1980 piece on temporal structures in discourse, her 1986 comparison of the English and French aspectual systems, a 1996 paper on the aspect system in Navajo (an increasingly-endangered language which Smith worked to preserve), and her 1980 and 1993 papers on the child’s acquisition of tense and aspect.

The current volume of articles covers much of her most fruitful work on the way in which language is used to express time, and will be essential reading for many working and studying in linguistics generally and in semantics particularly.

Carlota Smith received her bachelor's degree from Radcliffe College in 1955. In the late 1950s, she became a research assistant and then a doctoral student in the Department of Linguistics at the University of Pennsylvania. During this time she worked with Zellig Harris, who directed the doctoral dissertation of Noam Chomsky and who would also later direct her own doctoral dissertation. In 1961, Prof. Smith was a graduate student at the Massachusetts Institute of Technology in Cambridge, MA, where she was one of the very first woman students to work with Chomsky. Prof. Smith's first publication (`A Class of Complex Modifiers in English', 1961) dates from this period. It appeared in the journal Language.

After receiving her M.A. (1964) and Ph.D. (1967) at the University of Pennsylvania, Prof. Smith joined the faculty of The University of Texas at Austin in 1969, where she was a faculty member in the Department of Linguistics until her death. She served as the chair of the department from 1981-1985. In 1991, she was named the Dallas TACA Centennial Professor in the Humanities.

Prof. Smith's early research examined the syntax of English. In 1969, she published, along with Elizabeth Shipley and Lila Gleitman, a very influential paper on how children acquire English as a first language; in ensuing years she would publish several more papers on child language development. Starting in the mid-1970s, she embarked on what was perhaps her most important line of research. In many papers and in a very important book (The Parameter of Aspect, published in 1991 by Kluwer), she analyzed the ways in which languages encode time and how they encode the way events happen over time. Prof. Smith's work on temporal aspect has been notable because of its empirical foundation in her careful analyses of a number of quite different languages, including English, French, Russian, Mandarin, and Navajo. Through her many years of research on Navajo, she became a member of the Navajo Language Academy, a group that seeks to further the study of Navajo, to keep Navajo from becoming endangered, and to provide training in linguistic research to members of the Navajo Nation.

In 2003, Cambridge University Press published Prof. Smith's second book, Modes of Discourse. This book analyzes the grammatical properties that distinguish different genres of discourse (e.g., narratives vs. reports vs. descriptions). In this book and in earlier papers (for example, a 1985 paper on the French author Gustave Flaubert), she sought to bring the analytic tools of linguistics to the humanistic study of literature.

Carlota Smith was an active member of the Department of Linguistics until the very last. This semester she taught a graduate seminar on time in language. She was meeting with students and faculty in her office just three days before her death. Throughout the semester she was thinking about how to ensure the future of the department in which she had taught for virtually her entire career. At The University of Texas at Austin, her absence will be felt for many years to come.

Prof. Smith is survived by her husband, John Robertson, who is a professor in UT's Law School. She is also survived by her children Alison and Joel, and by her grandchildren Sylvia and Ari.