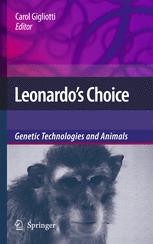 Leonardo’s Choice: Genetic Technologies and Animals is an edited collection of twelve essays and one dialogue focusing on the profound affect the use of animals in biotechnology is having on both humans and other species. Communicating crucial understandings of the integrated nature of the human and non-human world, these essays, unlike the majority of discussions of biotechnology, take seriously the impact of these technologies on animals themselves. This collection’s central questions revolve around the disassociation Western ideas of creative freedom have from the impacts those ideas and practices have on the non-human world.

Included essays contribute significantly to a growing scholarship surrounding "the question of the animal" emanating from philosophical, cultural and activist discourses. Its authors’ are at the forefront of the growing number of theorists and practioners across the disciplines concerned with the impact of new technologies on the more-than-human world.

Both a wide-ranging discussion of animals and biotechnology in science and culture, and a bracing call to action regarding animal exploitation, Leonardo’s Choice intervenes thoughtfully, yet forcefully, in one of the most pressing issues of our time.—Cary Wolfe, Author of Animal Rites (Chicago, 2003)

…when artists are entering the lab, and scientists are collaborating in bio-art, this book satisfies the need to interrogate the meanings of such boundary challenges - around both the dangers of capture and complicity, and the promises of critical scientific endeavour.—Dr. Richard Twine, ESRC Centre for Economic and Social Aspects of Genomics, Lancaster University, UK.

“Both a wide-ranging discussion of animals and biotechnology in science and culture, and a bracing call to action regarding animal exploitation, Leonardo’s Choice intervenes thoughtfully, yet forcefully, in one of the most pressing issues of our time.” —(Cary Wolfe, Bruce and Elizabeth Dunlevie Professor of English, Rice University, author of Animal Rites (Chicago, 2003) and What Is Posthumanism? (Minnesota, 2009) and editor of Zoontologies: The Question of the Animal (Minnesota, 2003)

“This book is most urgently needed, and I applaud Carol Gigliotti — a lone voice in new media art for far too long — for its genesis. Like Leonardo centuries ago, today’s artists and scientists face a choice, but with the most serious of consequences: to either support the status quo in terms of exploiting animals and other living beings as objects for human use — and thereby participate in the vast diminishing of life on this planet which is the greatest tragedy of our age — or to speak up and act against this future in any myriad of ways. An ethics-based approach to technology, with the goal of enhancing life rather than abusing it, is long overdue: it is my deepest hope that others will not only hear, but heed, Carol’s call.” —(Char Davies, artist and conservationist)

“Leonardo's Choice boldly exposes the epochal horror, cruelty, and degradation being wrought upon animals by transgenic art and science. When human organs are bred in pigs and pig genes are now likewise found in tomatoes, we have entered a frightening age of species crisis predicated upon biotech’s transgression of even the cellular limits to growth. In response, this profound book asks us to dwell insistently on how our society might instead create a more humane world, a planetary expression of peace and justice rather than just the patented frankenfuture of the GMO corporations and their vivisectionist minions.” —(Richard Kahn, Ph.D., Assistant Professor of Educational Foundations, University of North Dakota, USA, Editor-in Chief, Green Theory and Praxis: the Journal of Ecopedagogy)

“Carol Gigliotti correctly identifies the fundamental nature of the cultural revolution under way as we integrate molecular biology and genetic enginering into both our self image and our view of our place in the web of life. For all of human history, we have interacted and modified the life forms with which we have contact or involve in for agriculture or daily life. This accelerating symbiotic interaction now threatens the ecologies within which life developed on earth, and will inevitably alter what it means to be human. Gigliotti, by looking in depth at the work of artists working today, shifts the focus and succesfully challenges our assumptions.” —(Roger Malina, astrophysicist at the Laboratoire d'Astrophysique de Marseille CNRS, Interim Director of the Observatoire Astronomique de Marseille Provence and Executive Editor of the MIT Press Leonardo publications)

“Carol Gigliotti's powerful and timely volume exposes the myriad ways we control and exploit nonhuman animals through new biotechnologies. This book provides sharp critique of the anthropocentrism at the heart of science, capitalism, art and industry, placing the very real lives and deaths of our fellow beings at the heart of questions about ethics, progress and humanity. Leonardo's Choice is essential reading for scholars of critical animal studies, cultural studies, environmentalism, law and bioethics. It is also urgent reading for those who care about this planet and all the species who share it.” — (Dr Annie Potts, School of Culture, Literature and Society, University of Canterbury, New Zealand and Co-Director of the New Zealand Centre for Human-Animal Studies)

“At a time when most 'democratic' nations seem unwilling or incapable of providing broad civic fora for engaging with these issues, it has been left to critical theorists and artists to highlight the complex political and ethical questions raised by the intensified use of genetic technologies within our myriad human/animal relations. Leonardo's Choice represents an impressively diverse collection to do just that. Moreover when artists are entering the lab, and scientists are collaborating in bio-art, this book satisfies the need to interrogate the meanings of such boundary challenges - around both the dangers of capture and complicity, and the promises of critical scientific endeavour.” —(Dr. Richard Twine, ESRC Centre for Economic and Social Aspects of Genomics, Lancaster University, UK)

“Leonardo’s Choice: Genetic Technologies and Animals is divided into three sections … . book helps readers to understand more about the frightening and fascinating area of biotechnologies, and helps each of us to recognize the need for a personal change of conscience as a precursor to controlling and reforming biotechnologies. … The many concrete examples … helped me to think about connections between art and science, and to better understand precisely why ethics must be brought to bear on both of these runaway disciplines.” (Lisa Kemmerer, Anthrozoös, Vol. 23 (4), 2010)