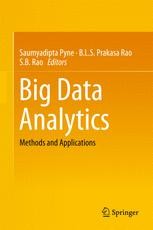 This book has a collection of articles written by Big Data experts to describe some of the cutting-edge methods and applications from their respective areas of interest, and provides the reader with a detailed overview of the field of Big Data Analytics as it is practiced today. The chapters cover technical aspects of key areas that generate and use Big Data such as management and finance; medicine and healthcare; genome, cytome and microbiome;  graphs and networks; Internet of Things; Big Data standards; bench-marking of systems; and others. In addition to different applications, key algorithmic approaches such as graph partitioning, clustering and finite mixture modelling of high-dimensional data are also covered. The varied collection of themes in this volume introduces the reader to the richness of the emerging field of Big Data Analytics.

SAUMYADIPTA PYNE is professor at the Public Health Foundation of India, at the Indian Institute of Public Health, Hyderabad, India. Formerly, he was P.C. Mahalanobis Chair Professor and head of Bioinformatics at the C.R. Rao Advanced Institute of Mathematics, Statistics and Computer Science. He is also Ramalingaswami Fellow of Department of Biotechnology, the Government of India, and the founder chairman of the Computer Society of India’s Special Interest Group on Big Data Analytics. Professor Pyne has promoted research and training in Big Data Analytics, globally, including as the workshop co-chair of IEEE Big Data in 2014 and 2015 held in the U.S.A. His research interests include Big Data problems in life sciences and health informatics, computational statistics and high-dimensional data modeling.

B.L.S. PRAKASA RAO is the Ramanujan Chair Professor at the C.R. Rao Advanced Institute of Mathematics, Statistics and Computer Science, Hyderabad, India. Formerly, he was director at the Indian Statistical Institute, Kolkata, and the Homi Bhabha Chair Professor at the University of Hyderabad. He is a Bhatnagar awardee from the Government of India, Fellow of all the three science academies in India, fellow of Institute of Mathematical Statistics, U.S.A., and a recipient of the national award in statistics in memory of P.V. Sukhatme from the Government of India. He has also received the Outstanding Alumni award from Michigan State University. With over 240 papers published in several national and international journals of repute, Professor Prakasa Rao is the author or editor of 13 books, and member of the editorial boards of several national and international journals. He was, most recently, the editor-in-chief for journals—Sankhya A and Sankhya B. His research interests include asymptotic theory of statistical inference, limit theorems in probability theory and inference for stochastic processes.

S.B. RAO was formerly director of the Indian Statistical Institute, Kolkata, and also director of the C.R. Rao Advanced Institute of Mathematics, Statistics and Computer Science, Hyderabad. His research interests include theory and algorithms in graph theory, networks and discrete mathematics with applications in social, biological, natural and computer sciences. Professor S.B. Rao has 45 years of teaching and research experience in various academic institutes in India and abroad. He has published about 90 research papers in several national and international journals of repute, and was editor of 11 books and proceedings. He wrote a paper jointly with the legendary Hungarian mathematician Paul Erdos, thus making his “Erdos Number” 1.

“The editors of this volume have assembled 13 papers by big data experts who participated in that conference, covering analytics and algorithms, benchmarks, use cases, problem statements, and solutions. … The book could serve as supplemental recommended reading for graduate data analytics courses … .” (Harry J. Foxwell, Computing Reviews, April, 2017)