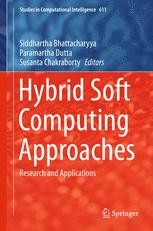 The book provides a platform for dealing with the flaws and failings of the soft computing paradigm through different manifestations. The different chapters highlight the necessity of the hybrid soft computing methodology in general with emphasis on several application perspectives in particular. Typical examples include (a) Study of Economic Load Dispatch by Various Hybrid Optimization Techniques, (b) An Application of Color Magnetic Resonance Brain Image Segmentation by Para Optimus LG Activation Function, (c) Hybrid Rough-PSO Approach in Remote Sensing Imagery Analysis, (d) A Study and Analysis of Hybrid Intelligent Techniques for Breast Cancer Detection using Breast Thermograms, and (e) Hybridization of 2D-3D Images for Human Face Recognition. The elaborate findings of the chapters enhance the exhibition of the hybrid soft computing paradigm in the field of intelligent computing.

Dr. Siddhartha Bhattacharyya did his Bachelors in Physics and Optics and Optoelectronics and Masters in Optics and Optoelectronics from University of Calcutta, India in 1995, 1998 and 2000, respectively. He completed PhD in Computer Science and Engineering from Jadavpur University, India in 2008. He is currently an Associate Professor and Head of Information Technology and Dean (R & D) of RCC Institute of Information Technology, India. Prior to this, he was an Assistant Professor in CS & IT of UIT, BU, India from 2005 – 2011. He was a Lecturer in IT of Kalyani Government Engineering College, India during 2001 – 2005. He is a co-author of about 118 research publications in international journals and conference proceedings. He is the co-editor of the Handbook of Research on Computational Intelligence for Engineering, Science and Business by IGI Global, USA. He is the co-author of Soft Computing for Image and Multimedia Data Processing by Springer-Verlag, Germany.

Dr. Paramartha Dutta, M. Stat, M. Tech (Computer Science) from Indian Statistical Institute Kolkata, and Ph. D (Engineering) from presently Indian Institute of Engineering Science and Technology, is currently a Professor in the Department of Computer and System Sciences, Visva Bharati University, Santiniketan, India for more than eight years. He has about one hundred and sixty papers in Journal and Conference proceedings, six books and three edited books to his credit. He has the experience of successfully handling various projects funded by the Government of India. Moreover, he has supervised three scholars who have earned their Ph. D. Dr. Dutta is member/fellow of different professional bodies including IEEE and ACM.

Dr. Susanta Chakraborty received the Bachelors (B. Tech) and Masters (M.Tech) degree in Technology from the University of Calcutta in 1983 and 1985, respectively and Ph.D (Tech.) in Computer Science in 1999 from University of Calcutta and research work done at Advance Computing and Microelectronic Unit, Indian Statistical Institute, Kolkata. He is currently a Professor in the Department of Computer Science and Technology of the Indian Institute of Engineering Science and Technology, West Bengal, India. Prior to this he has served University of Kalyani as Dean of Engineering, Technology and Management Faculty. He has published around 55 research papers in reputed International Journals including IEEE Transactions on CAD and refereed international conference proceedings of IEEE Computer Science Press.