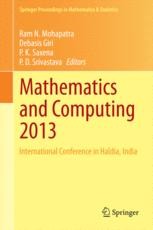 This book discusses recent developments and contemporary research in mathematics, statistics and their applications in computing. All contributing authors are eminent academicians, scientists, researchers and scholars in their respective fields, hailing from around the world. The conference has emerged as a powerful forum, offering researchers a venue to discuss, interact and collaborate and stimulating the advancement of mathematics and its applications in computer science. The book will allow aspiring researchers to update their knowledge of cryptography, algebra, frame theory, optimizations, stochastic processes, compressive sensing, functional analysis, complex variables, etc. Educating future consumers, users, producers, developers and researchers in mathematics and computing is a challenging task and essential to the development of modern society. Hence, mathematics and its applications in computer science are of vital importance to a broad range of communities, including mathematicians and computing professionals across different educational levels and disciplines.

RAM MOHAPATRA is professor of mathematics, University of Central Florida, Orlando, USA. He received his PhD degree from the University of Jabalpur, India, in 1968. Earlier, he taught at Sambalpur University in India, American University in Beirut, Lebanon, University of Alberta and York University, Canada, prior to coming to Orlando. His area of research is Mathematical Analysis and he is the author of two books, two edited monographs and over 120 research papers. He referees articles for professional journals and serves as a member of editorial board of a number of journals.

DEBASIS GIRI is professor at the Department of Computer Science and Engineering, Haldia Institute of Technology, India. He topics of interest are discrete mathematics, cryptography, information security, coding theory, advanced algorithms, design and analysis of algorithms and formal languages and automata theory. His research interests include cryptography, network security, security in wireless sensor networks and security in VANETs. Dr. Giri had delivered several talks and guest lectures at various universities and conferences. He is supervisor of three PhD research scholars. Further, he guided many B.Tech. and M.Tech. students. He is associate editor of the Journal of Security and Communication Networks (Wiley) and the Journal of Electrical and Computer Engineering Innovations. Further, he is editorial board member and reviewer of many reputed international journals. He is also program committee member of many international conferences. He is life member of Cryptology Research Society of India. He received his PhD on “Cryptanalysis and Improvement of Protocols for digital signature, smart-card authentication and access control” from Indian Institute of Technology Kharagpur. He did both his M.Tech. and M.Sc. from Indian Institute of Technology Kharagpur. He secured tenth position in all India rank with percentile score 98.42 in the Graduate Aptitude Test in Engineering (GATE) Examination in 1999. Dr. Giri has published more than 25 technical papers in several internal journals and proceedings.

P.K. SAXENA is director of one of the R&D labs of Defense Research Development Organization (DRDO) under the Ministry of Defense. Dr. Saxena, an outstanding scientist, has done his PhD on “Radical theory of near rings” from Indian Institute of Technology Kanpur. Before joining DRDO, he taught mathematics at National Institute of Technology (NIT) Silchar and National Defense Academy (NDA), Pune. Dr. Saxena has published about 62 research papers in several journals and conferences on interdisciplinary topics such as algebra, cryptology, fuzzy logic, artificial neural networks and speech technology. He has led many important R&D projects and guided many students in important engineering projects. Three scholars have received PhD degree under his supervision and several others are registered. Dr. Saxena had widely delivered talks, guest lectures, key note addresses at various forums apart from organizing international conferences as general chair. He has been in program committees of many international conferences. He has authored a book on Cryptology (in Hindi) which was awarded first prize by DRDO in 1997.

P.D. SRIVASTAVA is professor of mathematics at Indian Institute of Technology Kharagpur, India. During his 34 years’ of teaching career, he taught several courses such as functional analysis, topology, numerical analysis, measure theory, real analysis, complex analysis and calculus to undergraduate and postgraduate students. Besides teaching, Professor Srivastava is equally devoted to research activities. He has approximately 51 papers to his credit published in several international journals. He has supervised 10 research scholars for PhD degree in mathematics and one for PDF. Various universities have invited him for lectures and keynote address at their conferences. Various universities also invite him as an expert in the faculty selection as well as an expert to adjudicate PhD theses. He is also reviewer for the Mathematical Reviews as well as paper referee for many journals. He did his PhD from Indian Institute of Technology Kanpur and B.Sc., M.Sc. degree from Kanpur University. Dr. Srivastava is not only an established researcher in his area but also a teacher par excellence. His style of lecture presentation and full command on the subject impress the students, which is reflected by the students in the Students’ Profile Forms (teaching assessment by the students).