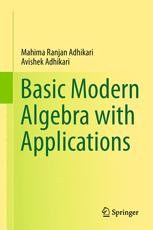 The book is primarily intended as a textbook on modern algebra for undergraduate mathematics students. It is also useful for those who are interested in supplementary reading at a higher level. The text is designed in such a way that it encourages independent thinking and motivates students towards further study. The book covers all major topics in group, ring, vector space and module theory that are usually contained in a standard modern algebra text.

In addition, it studies semigroup, group action, Hopf's group, topological groups and Lie groups with their actions, applications of ring theory to algebraic geometry, and defines Zariski topology, as well as applications of module theory to structure theory of rings and homological algebra. Algebraic aspects of classical number theory and algebraic number theory are also discussed with an eye to developing modern cryptography. Topics on applications to algebraic topology, category theory, algebraic geometry, algebraic number theory, cryptography and theoretical computer science interlink the subject with different areas. Each chapter discusses individual topics, starting from the basics, with the help of illustrative examples. This comprehensive text with a broad variety of concepts, applications, examples, exercises and historical notes represents a valuable and unique resource.

Mahima Ranjan Adhikari, PhD, is a former professor of pure mathematics at the University of Calcutta. His main interest lies is in algebra and topology. He has published a number of papers in several Indian and foreign journals including Proceedings of American Mathematical Society and four textbooks. 11 students have already been awarded PhD degree under his guidance. He is a member of American Mathematical Society and on the editorial board of several Indian and foreign journals. He was the president of the Mathematical Science Section of the 95th Indian Science Congress, 2008. He visited several institutions in India, USA, Japan, France, Greece, Sweden, Switzerland, Italy and many other countries on invitation. He is now the president of the Institute for Mathematics, Bioinformatics, Information Technology and Computer Science (IMBIC), www.imbic.org/index.html. He is also the principal investigator of an ongoing project, funded by the Government of India.

Avishek Adhikari, PhD, is an assistant professor of pure mathematics at the University of Calcutta. He is a recipient of the President of India Medal and Young Scientist Award. He was a post-doctorate fellow at the Research Institute INRIA, Rocquencourt, France. He was a visiting scientist at Indian Statistical Institute, Kolkata, and Linkoping University, Sweden. He visited many institutions in Japan, Sweden, France, England, Switzerland. His main interest lies is in algebra, discrete mathematics, theoretical computer science and their applications. He has published several papers in foreign journals and three textbooks on mathematics. He successfully completed several projects funded by the Government of India, and is a member of the research team from India for a collaborative Indo-Japan (DST-JST) research project. He is a member on editorial board of several journals and secretary (honorary) of the Research Institute IMBIC (www.imbic.org/index.html).

“I want to note explicitly that his treatment of what universality means in this context is particularly well done … It is also noteworthy that right after discussing fiber bundles in this fifth chapter, Adhikari goes on to the massively important topic of vector bundles, stressing right off the bat that “their homotopy classifications play a very important role in mathematics and physics.” … It is rather comprehensive (at around 600 pages it would be difficult to avoid this), and it shows very good taste on the author’s part as far as what he’s chosen to do and how he’s chosen to do it…Wow! What a nice book.” (Michael Berg, MAA Reviews, February, 2017)

“This fairly thick (more than 600 pages long) book covers a lot of topics that are not generally taught to American undergraduates at all. … This book is certainly an unusual one, filled with interesting material, and there are quite a few exercises spanning a wide range of difficulty. … have considerable value as a reference for undergraduate or graduate professors, or advanced students … .” (Mark Hunacek, MAA Reviews, March, 2014)

“This book gives an accessible presentation on Basic Modern Algebra with Applications … at the undergraduate level. Each chapter has interesting exercises and additional reading. … It is an interesting book which reveals the importance of modern algebra concepts in contemporary mathematics.” (Corina Mohorianu, zbMATH, Vol. 1284, 2014)

"This is a rather unusual book. intended as a text on modern algebra for undergraduate mathematics students, the book covers a vast area including many topics which are far too advanced for an undergraduate course, yet omitting some useful and important subjects such as simple groups, cyclotomy and Galois theory… book is basic only in the sense that it starts from the beginning in many topics being covered, but the learning curve is very steep in most places."(Peter Shiu, The Mathematical Gazette, Volume 99, Issue 544, March 2015)