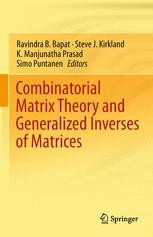 This book consists of eighteen articles in the area of `Combinatorial Matrix Theory' and `Generalized Inverses of Matrices'. Original research and expository articles presented in this publication are written by leading Mathematicians and Statisticians working in these areas. The articles contained herein are on the following general topics: `matrices in graph theory', `generalized inverses of matrices', `matrix methods in statistics' and `magic squares'. In the area of matrices and graphs, speci_c topics addressed in this volume include energy of graphs, q-analog, immanants of matrices and graph realization of product of adjacency matrices. Topics in the book from `Matrix Methods in Statistics' are, for example, the analysis of BLUE via eigenvalues of covariance matrix, copulas, error orthogonal model, and orthogonal projectors in the linear regression models. Moore-Penrose inverse of perturbed operators, reverse order law in the case of inde_nite inner product space, approximation numbers, condition numbers, idempotent matrices, semiring of nonnegative matrices, regular matrices over incline and partial order of matrices are the topics addressed under the area of theory of generalized inverses. In addition to the above traditional topics and a report on CMTGIM 2012 as an appendix, we have an article on old magic squares from India.

Ravindra B> Bapat is a Professor at the Indian Statistical Institute, Delhi Centre. He is a Fellow of the Indian Academy of Sciences, Indian National Science Academy and a J.C. Bose Fellow. He served as the President of the Indian Mathematical Society during 2007-2008. He has been on the editorial boards of Linear and Multilinear Algebra, Electronic Journal of Linear Algebra, India Journal of Pure and Applied Mathematics and Kerala Mathematical Association Bulletin.

K. Manjunatha Prasad is a Professor of Mathematics at the Department of Statistics, Manipal University, Manipal. He has several publications in the area of his research interest. His research interests are in matrix theory, generalized inverses, ring theory, projective modules and matrices in graph theory.

Simo Puntanen earned his PhD in Statistics from the University of Tampere (Finland) in 1987, where he is presently a Docent and Lecturer of Statistics. He was a Senior Fellow at the Academy of Finland (autumn 1988 and 1993 - 1995), an Associate Professor at Tampere University during 1997 - 1998 and worked as a Senior Scientist of the Academy in 1998 - 1999. He is currently the book review editor of the International Statistical Review.

“This book contains eighteen papers in the field of matrices in graph theory, generalised inverses of matrices, and matrix methods in statistics, written by leading mathematicians and statisticians. … the book covers a wide range of topics with substantial advances and is a welcome volume.” (Shuangzhe Liu, International Statistical Review, Vol. 82 (1), 2014)