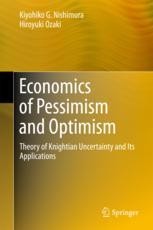 Economics of Pessimism and Optimism

Theory of Knightian Uncertainty and Its Applications

This is the first book to investigate individual’s pessimistic and optimistic prospects for the future and their economic consequences based on sound mathematical foundations. The book focuses on fundamental uncertainty called Knightian uncertainty, where the probability distribution governing uncertainty is unknown, and it provides the reader with methods to formulate how pessimism and optimism act in an economy in a strict and unified way. After presenting decision-theoretic foundations for prudent behaviors under Knightian uncertainty, the book applies these ideas to economic models that include portfolio inertia, indeterminacy of equilibria in the Arrow-Debreu economy and in a stochastic overlapping-generations economy, learning, dynamic asset-pricing models, search, real options, and liquidity preferences. The book then proceeds to characterizations of pessimistic (ε-contaminated) and optimistic (ε-exuberant) behaviors under Knightian uncertainty and  people’s inherent pessimism (surprise aversion) and optimism (surprise loving).  Those characterizations are shown to be useful in understanding several observed behaviors in the global financial crisis and in its aftermath.  The book is highly recommended not only to researchers who wish to understand the mechanism of how pessimism and optimism affect economic phenomena, but also to policy makers contemplating effective economic policies whose success delicately hinges upon people’s mindsets in the market.

Kiyohiko Nishimura is Professor at the National Graduate Institute for Policy Studies (GRIPS) and Professor Emeritus and Distinguished Project Research Fellow of the Center for Advanced Research in Finance at The University of Tokyo. Hiroyuki Ozaki is Professor of Economics at Keio University.

Kiyohiko G. Nishimura is emeritus professor of economics and distinguished project research fellow at The University of Tokyo and a professor of economics in the National Graduate Institute for Public Policy (GRIPS). Before returning to academia, he was deputy governor of the Bank of Japan for 5 years until March 19, 2013, one of the most turbulent periods in the history of the world economy and central banking. He received his B.A. (1975) and M.A. (1977) from The University of Tokyo and his Ph.D. (1982) from Yale University. He was associate professor (1983–1994) and professor (1994–2005). He joined the Bank of Japan as a Member of its Policy Board (2005–2008), and then as deputy governor (2008–2013). He was dean of the Graduate School of Economics at The University of Tokyo (2013–2015). Since February 2014, he has been chairman of the Statistics Commission of the Government of Japan. He received the Nikkei Prize in 1993, the Japan Economist Prize in 1997, and the TELECOM Social Science Award in 2006. He was also the winner of the Japanese Economic Association Nakahara Prize in 1998 for his outstanding international contribution to mathematical economics and economic theory. He was awarded Emperor ’s Medal of Honor with Purple Ribbon in 2015 for his outstanding contribution to theoretical economics.

Hiroyuki Ozaki is professor of economics at Keio University. He has been particularly active in developing the theory of dynamic decision making, where non-additive probability measures are used, with applications to elucidation of macroeconomic phenomena that are hard to explain in the traditional additive probability framework. He received his B.A. (1986) from Keio University and his Ph.D. (1992) from The University of Wisconsin at Madison, where he majored in economics and minored in mathematics. He was assistant professor at The University of Western Ontario (1993–1996) and associate professor at Tohoku University (1996–2005) before joining the Faculty of Economics at Keio University in 2005. He has been professor at Keio University since then. Dr. Ozaki’s academic research focuses on mathematical economics and the decision-theoretic foundation of economic agents’ behavior. Among his numerous contributions to this field, most notable is: "Dynamic programming for non-additive stochastic objectives," Journal of Mathematical Economics 25 (1996), 391–442 (with Peter A. Streufert), which developed powerful tool kits for dynamic analyses that can be available in a very general economic environment.

“To summarize, this book, jointly written by the two prominent economists Nishimura and Ozaki, is no doubt a monumental achievement on the economics of ambiguity and uncertainty. It is well organized and mathematically sophisticated. It is expected to be read by two types of readers: highly mathematically trained researchers and general theoretical scholars with less technical orientation. I believe that application-oriented researchers and policy-makers may also benefit from careful reading of such a first-rate work.” (Yasuhiro Sakai, Journal of Economic Psychology, Vol. 72, June, 2019)

“Kiyohiko Nishimura and Hiroyuki Ozaki have produced a thorough, scholarly, and mathematical rigorous treatment of decision theory when the probability distribution governing uncertainty is unknown … . Nishimura and Ozaki are to be congratulated on their thorough and innovative treatment of how to use convex Choquet capacities to make fundamental uncertainty operational, under certain assumptions. Their book will be indispensable to, and warmly welcomed by, technically oriented researchers in decision theory.” (Robert W. Dimand, Journal of Economics, Vol. 124, 2018)

“It is especially striking that an economist as immersed in quantitative monetary policy issues as former Deputy Governor of the Bank of Japan Kiyohiko Nishimura would come away from that experience with an enhanced interest in rigorously modeling optimism and pessimism in terms of formal models that extend Bayesian decision theory to incorporate model ambiguity.  Nishimura and his co-author, Hiroyuki Ozaki have created this technically sophisticated and fascinating book that applies state-of-the-art models of model ambiguity to important decision problems in economics.” (Thomas J. Sargent, Professor of Economics, New York University; Nobel Laureate in Economics, 2011)

“The last decades witnessed a significant increase in the interest of economists on the distinction between risk and uncertainty that was first proposed by Frank Knight. The recent financial crisis made this topic even more relevant.  In this remarkable book, Professor Nishimura, an economic theorist who was Deputy Governor of the Bank of Japan during part of this difficult period, and Professor Ozaki, who made several theoretical contributions to dynamic decision making in the presence of risk, combine an exposition of advances in the formalization of “Knightian uncertainty” with several applications to decision problems in economics. An excellent textbook for an advanced graduate course, it also serves as an introduction to the topic for researchers who want to get acquainted with the field.” (José A. Scheinkman, Charles and Lynn Zhang Professor of Economics at Columbia University and Theodore Wells ’29 Professor of Economics Emeritus  at Princeton University)

“This book is a rare example of economics at its best – starting at the very foundations, emphasizing the mathematical and philosophical underpinnings of economic theory, proceeding into micro- and macro-economic theory under uncertainty, and culminating with insights into economic crises. This opus represents the culmination of years of collaboration of two preeminent economists who are unique in their originality, depth, and scope. Given the formidable intellectual edifice of economic theory on the one hand, and phenomena such as the 2007-2008 crisis on the other, it takes no less to address the question, “What went wrong?” and to suggest how economics can be improved as a science, without giving up on the benefit of rigorous analysis.” (Itzahk Gilboa, Professor, Eitan Berglas School of Economics, Tel-Aviv University and Professor of Economics and Decision Sciences, HEC, Paris)