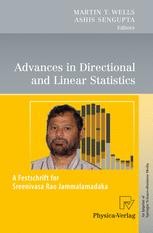 Advances in Directional and Linear Statistics

A Festschrift for Sreenivasa Rao Jammalamadaka

The present volume consists of papers written by students, colleagues and collaborators of Sreenivasa Rao Jammalamadaka from various countries, and covers a variety of research topics which he enjoys and contributed immensely to.

Professor Sreenivasa Rao Jammalamadaka, formerly known as J. S. Rao and affectionately known to most of us as JS, was born on December 7, 1944, at Munipalle, India. Being under-aged for engineering studies was a blessing in disguise, and he was among the first batch of students selected for the Bachelor of Statistics (B. Stat.) degree at the Indian Statistical Institute (ISI), Kolkata. He received his Masters and Ph.D. degrees also from the ISI, and has the distinction of being the first B.Stat.-M.Stat.-Ph.D. of the ISI. He received his education from such legendary figures as Professors P. C. Mahalanobis, J. B. S. Haldane, C. R. Rao, and D. Basu among others, and worked with Professor C.R. Rao for his Ph.D. (1969) on a then newly emerging area, Directional Data Analysis. JS moved to the USA in 1969 and was a faculty member at the Indiana University and then at the University of Wisconsin, Madison, before he moved to the University of California, Santa Barbara (UCSB) in 1976, where he has remained since then. At UCSB he played a leading role in creating the new Department of Statistics and Applied Probability and was its first Chairman. He has been a prodigious mentor to the graduate students in that department, having provided guidance to as many of 35 Ph.D. students, at the last count. Throughout his career, JS has been generous to his colleagues in India, inviting them to the U.S. and spending many of his sabbaticals helping Universities in India as well as in other countries. JS has published extensively in leading international journals. His research work spans a wide spectrum which includes: Goodness-of-Fit tests, Linear Models, Non-parametric and Semi-parametric inference, Bayesian analysis, Reliability, Spacings statistics, and most notably, Directional Data Analysis. He has written several books, both for undergraduate students as well as for advanced researchers. He has collaborated with a large number of researchers from around the world in general, and from India in particular. A Fellow of both the ASA and the IMS among other professional organizations, he has served the cause of statistics at many national and international levels, including that of the President of the International Indian Statistical Association.