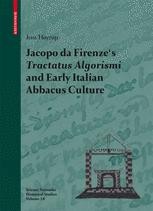 In the city republics of Renaissance Italy, it was a common practice among the merchant class to send sons for a two-year course of study at an "abbacus school", where they learned practical, mostly commercial mathematics, known as abbaco. From this school institution, several hundred manuscripts survive, all in Italian, often containing not only what the masters needed in their teaching but also algebra or other advanced mathematical material. A signal feature of the book by Jens Høyrup is the first translation of one of these abbacus manuscripts into English.

The abbacus books have long been supposed to be reduced versions of Leonardo Fibonacci’s Liber abbaci. Analysis of early abbacus books, not least of the first specimen treating of algebra – Jacopo da Firenze’s Tractatus algorismi from 1307 – shows instead that abbacus mathematics was an exponentof a more widespread culture of commercial mathematics, already known by Fibonacci, and probably flourishing in Provence and/or Catalonia before it reached Italy. Abbacus algebra – eventually the main inspiration for the algebraic breakthrough of the 16th and 17th centuries – was inspired from a Romance-speaking region outside Italy, most likely located in the Provençal-Catalan area, and ultimately from a similar practitioners’ level of Arabic mathematics.

The book contains, along with the English translation, an edition of Jacopo’s Tractatus and a commentary analyzing Jacopo’s mathematics and its links to Provençal, Catalan, Arabic, Indian and Latin medieval mathematics. It will provide historians of mathematics and mathematics teachers with a new perspective on a period and on processes which eventually reshaped the whole mathematical enterprise in the 17th century.