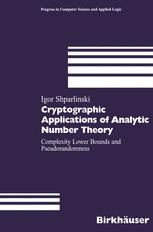 The book introduces new ways of using analytic number theory in cryptography and related areas, such as complexity theory and pseudorandom number generation.

- various lower bounds on the complexity of some number theoretic and cryptographic problems, associated with classical schemes such as RSA, Diffie-Hellman, DSA as well as with relatively new schemes like XTR and NTRU

- one of the principal tools is bounds of exponential sums, which are combined with other number theoretic methods such as lattice reduction and sieving

- an extensive and up-to-date bibliography

Cryptographers and number theorists will find this book useful. The former can learn about new number theoretic techniques which have proved to be invaluable cryptographic tools, the latter about new challenging areas of applications of their skills.

“Igor Shparlinski is a very prolific mathematician and computer scientist … . The book is written at a very high level, suitable for graduate students and researchers in computer science and mathematics. … book has a unique perspective, and is not really comparable to other books in the area. … book contains many deep results, and the mathematically-sophisticated reader can find much that is novel. … this is an impressive work that will be of significant interest to researchers in cryptography and algorithmic number theory.” (Jeffrey Shallit, SIGACT News, Vol. 41 (3), September, 2010)