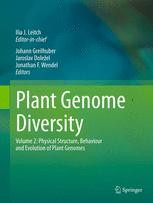 This second of two volumes on Plant Genome Diversity provides, in 20 chapters, insights into the structural evolution of plant genomes with all its variations. Starting with an outline of plant phylogeny and its reconstruction, the second part of the volume describes the architecture and dynamics of the plant cell nucleus, the third examines the evolution and diversity of the karyotype in various lineages, including angiosperms, gymnosperms and monilophytes. The fourth part presents the mechanisms of polyploidization and its biological consequences and significance for land plant evolution. The fifth part deals with genome size evolution and its biological significance. Together with Volume I, this comprehensive book on the plant genome is intended for students and professionals in all fields of plant science, offering as it does a convenient entry into a burgeoning literature in a fast-moving field.

Ilia J. Leitch studied biology at Bristol University, followed by postdoctoral research at the John Innes Institute, UK, applying the technique of fluorescent in situ hybridization to study grass chromosome organization. Since 1993 she has been at the Jodrell Laboratory, Royal Botanic Gardens, Kew, where her work is focused on understanding the evolutionary significance of the immense diversity of plant genomes (e.g. size, number, organization and composition).

Johann Greilhuber is an Associate Professor at the University of Vienna (Faculty of Life Sciences) in the Department of Systematic and Evolutionary Botany (formerly the Institute of Botany), where he has been a member of staff since 1968. He received his PhD in 1973 and became Professor in 1978 (Habilitation). His main research interests are genome size and the cytometric methods used to estimate it, chromosome banding, cytogenetics and karyosystematics.

Jaroslav Doležel holds a PhD degree in Genetics, which he received from the Czechoslovak Academy of Sciences, Prague in 1983. He spent most of his research career at the Institute of Experimental Botany in Olomouc, Czech Republic, where he established the Laboratory of Molecular Cytogenetics and Cytometry and pioneered the use of DNA flow cytometry in plants. He is an Associate Professor at the Palacký University in Olomouc and his research interests focus on plant genome structure and evolution.

Jonathan F. Wendel is a Professor and Chair of the Ecology, Evolution, and Organismal Biology Department at Iowa State University, where he has been on the faculty since 1986. Research interests in his lab encompass molecular and genome evolution, phylogenetics, and the phenotypic evolution of higher plants. His research group employs a diverse set of genomic technologies and approaches to explore the manner in which genomes change over evolutionary time, as well as the relationship between these events and morphological change. They have a particular interest in the mysterious and common phenomenon of polyploidy, with a special focus on the cotton genus.