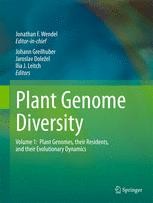 Plant Genomes, their Residents, and their Evolutionary Dynamics

In this timely new 2-volume treatise, experts from around the world have banded together to produce a first-of-its-kind synopsis of the exciting and fast moving field of plant evolutionary genomics. In Volume I of Plant Genome Diversity, an update is provided on what we have learned from plant genome sequencing projects. This is followed by more focused chapters on the various genomic “residents” of plant genomes, including transposable elements, centromeres, small RNAs, and the evolutionary dynamics of genes and non-coding sequences. Attention is drawn to advances in our understanding of plant mitochondrial and plastid genomes, as well as the significance of duplication in genic evolution and the non-independent evolution among sequences in plant genomes. Finally, Volume I provides an introduction to the vibrant new frontier of plant epigenomics, describing the current state of our knowledge and the evolutionary implications of the epigenomic landscape.

Jonathan F. Wendel is a Professor and Chair of the Ecology, Evolution, and Organismal Biology Department at Iowa State University, where he has been on the faculty since 1986. Research interests in his lab encompass molecular and genome evolution, phylogenetics, and the phenotypic evolution of higher plants. His research group employs a diverse set of genomic technologies and approaches to explore the manner in which genomes change over evolutionary time, as well as the relationship between these events and morphological change. They have a particular interest in the mysterious and common phenomenon of polyploidy, with a special focus on the cotton genus.

Johann Greilhuber is an Associate Professor at the University of Vienna (Faculty of Life Sciences) in the Department of Systematic and Evolutionary Botany (formerly the Institute of Botany), where he has been a member of staff since 1968. He received his PhD in 1973 and became Professor in 1978 (Habilitation). His main research interests are genome size and the cytometric methods used to estimate it, chromosome banding, cytogenetics and karyosystematics.

Jaroslav Doležel holds a PhD degree in Genetics, which he received from the Czechoslovak Academy of Sciences, Prague in 1983. He spent most of his research career at the Institute of Experimental Botany in Olomouc, Czech Republic, where he established the Laboratory of Molecular Cytogenetics and Cytometry and pioneered the use of DNA flow cytometry in plants. He is an Associate Professor at the Palacký University in Olomouc and his research interests focus on plant genome structure and evolution.

Ilia Leitch studied biology at Bristol University, followed by postdoctoral research at the John Innes Institute, UK, applying the technique of fluorescent in situ hybridization to study grass chromosome organization. Since 1993 she has been at the Jodrell Laboratory, Royal Botanic Gardens, Kew, where her work is focused on understanding the evolutionary significance of the immense diversity of plant genomes (e.g. size, number, organization and composition).