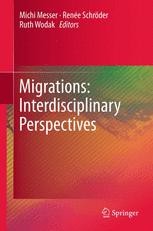 This volume covers the most important contributions to and discussions at the international symposium Migrations: Interdisciplinary Perspectives (1-3, July, University of Vienna), organised by Renée Schroeder and Ruth Wodak which  was  dedicated to the multiple interdisciplinary dimensions of ‘migrations’, both from the viewpoints of the Social Sciences and Humanities as well as from the manifold perspectives of the Natural Sciences. The book is organized along the following dimensions:

Fundamentals of Diffusion and Spread in the Natural Sciences and beyond

Media Representations of Migrants and Migration

Migration and the Genes

Michi Messer studied Psychology and Applied Linguistics at the University of Vienna. Currently s/he is working on a thesis about the discursive construction of sex- and gender differences in science by analysing biology textbooks within the framework of critical discourse analysis.  Besides CDA and social studies of science, s/he is especially interested in feminist and queer theories and politics, focusing on non-conforming bodies, transgressing genders and deviant desires. Since 2009, Michi works for IDee, the Forum for Interdisciplinary Dialogue, at the University of Vienna. Together with Ruth Wodak and Renée Schroeder s/he  organized the symposium “Migrations: Interdisciplinary Perspectives” in 2010,  at the University of Vienna.

Renée Schroeder is the Head of the Department of Biochemistry and Molecular Cellbiology at the Max F. Perutz Laboratories, University of Vienna in Austria. She was born in Joao Monlevade, Brazil in 1953 and migrated to Austria in 1967. After studying biochemistry at the University of Vienna, she received a PhD in 1981 and spent several years as a post-doc at the Munich University in Germany, at the CNRS in Gif sur Yvette in France and at the New York State Department of Heath at Albany, New York. Since 1989, Renée Schroeder is a group leader and her research is centered around the function and structure of non-coding RNAs. She was a member of the Austrian Bioethics commission (2001 – 2005), the Austrian Delegate at EMBO (1998 – 2004) and Vice President of the Austrian Science Fund FWF (2005 – 2010). Currently, Renée Schroeder is the Editor in chief of RNA Biology. She received the Wittgenstein award in 2003 and the Eduard Buchner award in 2011. She is an elected member of EMBO and of the Austrian Academy of Sciences.

Ruth Wodak is Distinguished Professor of Discourse Studies at Lancaster University since 2004 and has remained affiliated to the University of Vienna where she became full professor of Applied Linguistics 1991. Besides various other prizes, she was awarded the Wittgenstein Prize for Elite Researchers in 1996. 2008, she was awarded the Kerstin Hesselgren Chair of the Swedish Parliament and an honorary doctorate 2010 (university Örebro). Her research interests focus on discourse studies, gender studies, language and/in politics, prejudice and discrimination, and on ethnographic methods of linguistic field work.

She is co-editor of the journals Discourse and Society, Critical Discourse studies, and Language and Politics, and of the book series Discourse Approaches to Politics, Society and Culture (DAPSAC).

For a list of publications, recent articles, resources for discourse studies and other information, see http://www.ling.lancs.ac.uk/profiles/265.
Show all