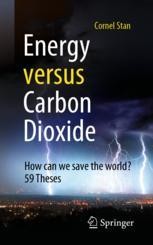 How can we save the world? 59 Theses

​This book is focussed on forms of energy for the future, while maintaining climate neutrality, partly by drastically reducing, partly by recycling the resulting carbon dioxide emissions. Electric drive of cars and machines instead of combustion engines do not solve the conflict between energy and carbon dioxide, more efficient ways are described. The book presents hopeful forms of energy conversion without carbon dioxide such as photovoltaics, wind power and hydropower, with their advantages, but also with their disadvantages. More promissing is the energy generation maintaining climate neutrality: The water cycle nature-electrolysis-machine-nature is compared with the carbon dioxide cycle nature- photosynthesis in plant-machine-nature.  The results of this analysis are largely surprising from such perspective.

Prof. Dr.-Ing. habil. Prof. E. h. Dr. h. c. mult. Cornel Stan studied aerospace engineering at the Polytechnic University of Bucharest. He received his doctorate in 1984 in the field of internal combustion engines at the Technical University of Zwickau and completed his habilitation there in 1989 in the field of automotive engineering. From 1984 he worked for the MZ-Motorradwerk Zschopau (successor to DKW) for seven years, where he was in a leading position in the development of future drives.

In 1992 Stan was appointed professor for technical thermodynamics at the University of Applied Sciences in Zwickau, later the West Saxon University of Applied Sciences in Zwickau (Westsächsische Hochschule Zwickau), where he later also became director of the Institute for Automotive Technology. His teaching and research areas include motor vehicle drive systems, direct injection processes, simulation of thermodynamic processes, combustion processes, alternative fuels and energy management in vehicles. His specialist books on thermodynamics, alternative drives for automobiles and direct injection systems for gasoline and diesel engines are included in many of the major national libraries around the world. Stan is the author or co-author of more than 30 specialist books, over 150 scientific articles and 40 international patents, in particular on unconventional injection processes in internal combustion engines.

In 1994 he became chairman of the board and scientific director of the newly founded research and transfer center e.V. at the West Saxon University of Applied Sciences in Zwickau, (FTZ Zwickau), whose activities are currently focused on automotive engineering and electronics, electromagnetic compatibility, electrical power engineering, new technologies and materials in mechanical engineering and laser technology.

Stan is also the author of well-known novels published in German, English and Romanian. Among his novels are the "Automacher" and "Dracfried".

Fellow of the Society of Automotive Engineers SAE International, 2008