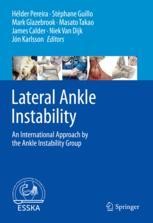 An International Approach by the Ankle Instability Group

The most recent procedures, particularly those which are minimally invasive and arthroscopically assisted, are described and discussed in depth. Detailed attention is also devoted to controversies such as the indications and timing for conservative or surgical treatment, the current and future roles of arthroscopy, the definition of “anatomic” repair, and the upcoming concept of “anatomic reconstruction” (replication of anatomy by using a graft).

The book is published in cooperation with ESSKA, and the chapter authors include clinicians and scientists working in the field of foot and ankle orthopaedics and sports medicine from across the world. All who are involved in the care of patients suffering from ankle instability, including amateur and high-level athletes, will find Lateral Ankle Instability to be an excellent source of knowledge and a valuable aid to clinical practice.

Hélder M.D. Pereira, MD, PhD, is a Specialist in Orthopaedics and Traumatology at  Póvoa de Varzim-Vila do Conde Hospital Centre, Portugal, and he is researcher, PhD candidate, and invited instructor at Minho university, Braga-Guimarães, Portugal. Moreover he is member of the Foot and Ankle Unit at Ripoll y De Prado Sports Clinic, FIFA Medical Centre of Excellence, Murcia-Madrid, Spain, where he is Coordinator of Clinical Research.  He is past-Chairman of ESSKA-AFAS (Ankle and Foot Associates Section) and from 2014 to 2016 chaired the Basic Science Research Committee of ESSKA. He is an editorial board member of Knee Surgery, Sports Traumatology, Arthroscopy (KSSTA) and has authored around 100 publications.

Stephane Guillo, MD,  is the Medical director of SOS PIED CHEVILLE BORDEAUX, France,  a clinical and research institute for foot and ankle surgery. He is also the founder of the Ankle Instability Group and has held leadership roles in various associations. His research is focused now mainly on ankle ligament treatment.

Mark Glazebrook, B.Sc.(H), M.Sc., Ph.D., MD, FRCS(C) is a full time Professor of Orthopaedic Surgery at Dalhousie University. He completed his medical training in 1994 and completed specialty training in Orthopaedic Surgery in 1999 at Dalhousie.  He then went on to complete a fellowship in Orthopedic Foot & Ankle and Sports Medicine at the University of Western Ontario. This was followed with a PhD in Achilles Tendon Disease at Dalhousie University. Dr. Glazebrook devotes 80% of his working time to clinical practice focusing on Orthopedic Foot & Ankle Reconstruction and Sports Medicine. During research time focus is on outcome studies on Evidence Based Medicine, Ankle Arthritis, MTP Arthritis, Bone Graft Substitutes and Achilles tendon rupture care.  He is Past President of the Canadian Orthopedic Association (COA).
Masato Takao, MD, PhD is Professor and President of Clinical and Research Institute for Foot and Ankle Surgery (CARIFAS), Jujo Hospital, Kisarazu, Chiba, Japan. He has worked at CARIFAS since 2017. His clinical focus is foot and ankle surgery. His PhD-thesis in 1999 was devoted to ”Anatomy for ankle arthroscopy”, and since then he has been the author of more than 250 peer-reviewed publications, more than 50 book chapters and textbooks in orthopaedic foot and ankle surgery including English and domestic papers. He is a founding member of Ankle Instability Group (AIG) and chaired the 5th AIG meeting at 2018.

James Calder TD MD PhD FRCS completed higher surgical training in London before completing a Fellowship in Brisbane, Australia with Dr Terry Saxby. He was appointed consultant at Hampshire Hospitals and then Chelsea & Westminster Hospital, London. He is Professor in the Dept of Bioengineering, Imperial College London specialising in sports injury research. He has gained a reputation for his clinical interest in the management of foot and ankle injuries in the elite athlete. He looks after many of the professional football teams across Europe and national olympic, rugby, and cricket teams as well as the Royal Ballet, Covent Garden and Birmingham Royal Ballet. He is past chairman of ESSKA-AFAS and the Achilles Tendon Study Group, sub-editor of Bone & Joint Journal  and previously Associate Editor KSSTA. He co-founded the Fortius Clinic London

Prof. Dr. C. Niek van Dijk, MD, PhD is a leading authority for surgery of the ankle. He is currently working in the FIFA Medical Centers of Excellence in Madrid, Clinic Ripol&DePrado&VanDijk and in Porto, Clinica de Dragão. Between 2002-2016 he was head of the Orthopaedic Department of the AMC Hospital (Amsterdam UMC). He is emeritus professor in Orthopaedic Surgery at the University of Amsterdam. In 2000 N^ 4000 members from more than 115 countries. Niek van Dijk  was president of the Dutch Orthopedic Association, president of the Nordic Orthopedic Association and president of ESSKA and ESSKA-AFAS. He is honorary member of several Societies and Associations. He is the tutor of 50 PhD students who he guided to a successful defense of their PhD-thesis. Niek van Dijk published over 350 scientific indexed publications, wrote over 100 book chapters and is editor of several books. He is founding editor of JISAKOS, the journal of ISAKOS.

Jon Karlsson, MD, PhD is a Professor of Orthopaedics and Sports Traumatology at the Sahlgrenska Academy, Gothenburg University, Gothenburg, Sweden. Originally from Iceland, he has worked at Sahlgrenska University Hospital since 1981. His clinical focus is knee sugery, expecially complex knee injuries, knee dislocations and revision surgery. He works as Foot & Ankle surgeon as well. His PhD-thesis in 1989 was devoted to ”Chronic Lateral Ankle Instability”, and since then he has been the author of more than 500 peer-reviewed publications, more than 100 book chapters and over 40 textbooks in orthopaedics and sports traumatology. He has mentored 60 PhD-students and is currently (since 12 years) the chief Editor of KSSTA (Knee Surgery Sports Traumatology Arthroscopy). He has been the care-taking physician of a profssional football club (IFK Göteborg) since 1984.