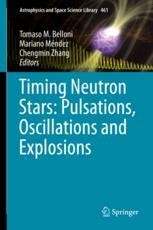 Neutron stars, whether isolated or in a binary system, display a varied and complex phenomenology, often accompanied by extreme variability of many time scales, which takes the form of pulsations due to the object rotation, quasi-periodicities associated to accretion of matter, and explosions due to matter accreted on the surface or to starquakes of highly magnetized objects.

This book gives an overview of the current observational and theoretical standpoint in the research on the physics under the extreme conditions that neutron stars naturally provide. The six chapters explore three physical regions of a neutron star:

Tomaso M. Belloni studied physics at the University of Milan and graduated in 1986 with a thesis on a black-hole binary. He worked at the Max-Planck Institut für extraterrestrische Physik (Germany) and at the University of Amsterdam (the Netherlands). Since 1999 he is at INAF - Osservatorio Astronomico di Brera in Merate, Italy, currently as a Senior Scientist. He was Leverhulme Visiting Professor at the University of Southampton, UK in the years 2012-2013 and is Visiting Professor there since then. He is currently chairman of subcommission E1 of COSPAR and editor for New Astronomy. His interests are in accreting X-ray binaries and time series analysis.

Chengmin Zhang received his Ph.D. in Astrophysics at The University of Hong Kong (China), on the topics of magnetic field  and spin period evolutions of accreting neutron stars in binary systems and formations of millisecond pulsars. He had the positions for  the research fellowships at IFT/UNESP (Brazil) on  gravitational field  and relativistic astrophysics and at Theoretical  Astrophysics Institue of Sydney University (Australia) on pulsar astrophysics and radio scintillation. He is now a reaserch professor at CAS Key Lab of FAST, National Astronomical Observatories, Chinese Academy of Sciences, and a teaching professor  at The University of Chinese Academy of Sciences.