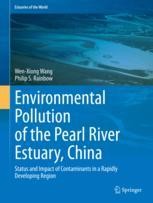 Status and Impact of Contaminants in a Rapidly Developing Region

The Pearl River Estuary (PRE) is the Western name for a very large estuary in southern China that is currently home to an industrial metropolis of staggering size, and one that is rapidly evolving. The Chinese name for the Pearl River is Zhujiang. Guangzhou lies at the head of the estuary, and Macau and Hong Kong are on the western and eastern sides, respectively, of the wide opening of the estuary to the South China Sea. The new cities of Zhuhai and Shenzhen lie immediately north of Macau and Hong Kong, respectively. The recent establishment of the Greater Bay Area (GBA), which covers the majority of the Pearl River Delta area, with a total population of over 70 million, will certainly put the PRE under strict environmental scrutiny. The PRE system itself will provide a model system for environmental scientists owing to its major anthropogenic perturbation and influences, as well as the highly dynamic nature of the estuary.
This book addresses the major environmental concerns regarding this estuary, contaminants and other pollutants, e.g. toxic metals, organic contaminants and emerging compounds. Questions addressed here include: What are the sources of the contaminants? What have the environmental consequences of these contaminants been for the estuary? What will the future bring? The research presented here on the Pearl River Estuary offers a wealth of insights for other major contaminated estuaries around the world.

Prof. Wen-Xiong Wang is a Chair Professor at the School of Energy and Environment, City University of Hong Kong, and was formerly affiliated with the Hong Kong University of Science and Technology. Prof. Wang is an ecotoxicologist by training and has been working on metal ecotoxicology for over 30 years. His major research goal is to understand the biogeochemistry, bioavailability and toxicity of metals to aquatic organisms, so as to better manage metals in the environment. Prof. Wang has authored over 460 peer-reviewed publications on subjects related to metal ecotoxicology, biogeochemistry, and more recently nanotoxicology. He is the corresponding or first author for the majority of his publications. He is the Editor of Environmental Toxicology and Chemistry, an Associate Editor of Environmental Pollution, and serves on the Editorial Boards of many other international journals on the environmental sciences. He received the prestigious Overseas Distinguished Young Scientist Award from the Chinese National Science Foundation in 2002, the Biwako Prize for Ecology in Japan for his work on metals in aquatic systems, the Changjiang Chair Professorship from the Ministry of Education in 2006, and the first Prize in Natural Science (as a sole PI) from the Ministry of Education for his work on the trophic transfer of metals. He is an elected fellow of SETAC and the Institute of Marine Engineering, Science and Technology.
Prof. Philip Rainbow has nearly 50 years of experience researching the biology of trace metals. As lecturer, reader, professor and Head of Department at the School of Biological Sciences, Queen Mary University of London, he has taught students at the undergraduate, masters and PhD levels, and often conducted courses overseas. From 1997 to 2013, he was Keeper of Zoology and subsequently Head of the Department of Life Sciences at the Natural History Museum in London. He has published more than 250 refereed scientific publications, including one single-authored, two co-authored and seven edited books, and more than 30 popular articles. In 1998 he was elected a Fellow of the Institute of Biology, and in 2014 a Fellow of the Marine Biological Association of the United Kingdom. In 2002, he was awarded the Environmental Pollution Kenneth Mellanby Review Award.