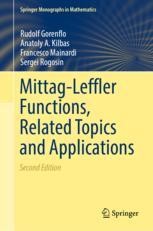 The 2nd edition of this book is essentially an extended version of the 1st and provides a very sound overview of the most important special functions of Fractional Calculus. It has been updated with material from many recent papers and includes several surveys of important results known before the publication of the 1st edition, but not covered there.

As a result of researchers’ and scientists’ increasing interest in pure as well as applied mathematics in non-conventional models, particularly those using fractional calculus, Mittag-Leffler functions have caught the interest of the scientific community. Focusing on the theory of Mittag-Leffler functions, this volume offers a self-contained, comprehensive treatment, ranging from rather elementary matters to the latest research results. In addition to the theory the authors devote some sections of the work to applications, treating various situations and processes in viscoelasticity, physics, hydrodynamics, diffusion and wave phenomena, as well as stochastics. In particular, the Mittag-Leffler functions make it possible to describe phenomena in processes that progress or decay too slowly to be represented by classical functions like the exponential function and related special functions.

The book is intended for a broad audience, comprising graduate students, university instructors and scientists in the field of pure and applied mathematics, as well as researchers in applied sciences like mathematical physics, theoretical chemistry, bio-mathematics, control theory and several other related areas.

R. Gorenflo (1930–2017) received his doctorate from the Technical University of Karlsruhe in 1960 for his work on complex functions. Then from 1974, after several engagements as an applied mathematician in a number of scientific and industrial Institutions, since 1974 he served as a Professor at the Free University Berlin, where he retired in 1998, remaining an active researcher. Since the 1960s he was actively interested in fractional integral equations and diffusion problems, leading him to a close collaboration with F. Mainardi and other researchers, focusing on fractional differential equations and related special functions, with a particular emphasis on modeling physical processes.

A.A. Kilbas (1948–2010) graduated from the Belarusian State University in Minsk in 1971, where he received his PhD and Doctor of Sciences degrees and where he workeding continuously at this university for almost 40 years. Professor A.A. Kilbas was a world-reknowned scientist whose contributions to the theory of integral equations, fractional integro-differentiation, fractional differential equations, integral transforms and special functions are highly regarded by the mathematical community. Many of his results were obtained in collaboration with scientists fromof all over the world. He was the author of more than 300 research articles and 6 monographs, includingn particular, one of the most important monographs in Fractional Calculus, “Fractional Integral and Derivatives: Theory and Applications” (joint with S.G. Samko and O.I. Marichev).

F. Mainardi graduated with a degree in Theoretical Physics from the University of Bologna in 1966, where he also took an advanced degree and continueds to serve as a Professor of Mathematical Physics for more than 40 years at the University of Bologna. He is the author of three books, has been athe co-organizers of several international conferences and is the editor of various books of selected papers. His main research interests are devoted to problems of Applied Mathematics, Continuum Mechanics, Wave Motion, Fractional Calculus and Stochastic Processes, on which he has beenis actively working also since his retirement from the University of Bologna in 2015.

S.V. Rogosin graduated from the Belarusian State University in Minsk in 1974, where he later received his PhD. His research interests concern boundary value problems, complex analysis, integral equations and fractional calculus and their applications in continuous media mechanics. He is the author of three books, has been the co-organizer of several international conferences and is the editor of various books of selected papers.