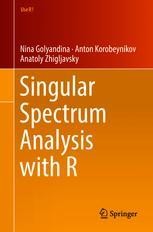 This comprehensive and richly illustrated volume provides up-to-date material on Singular Spectrum Analysis (SSA). SSA is a well-known methodology for the analysis and forecasting of time series. Since quite recently, SSA is also being used to analyze digital images and other objects that are not necessarily of planar or rectangular form and may contain gaps. SSA is multi-purpose and naturally combines both model-free and parametric techniques, which makes it a very special and attractive methodology for solving a wide range of problems arising in diverse areas, most notably those associated with time series and digital images. An effective, comfortable and accessible implementation of SSA is provided by the R-package Rssa, which is available from CRAN and reviewed in this book.

Written by prominent statisticians who have extensive experience with SSA, the book (a) presents the up-to-date SSA methodology, including multidimensional extensions, in language accessible to a large circle of users, (b) combines different versions of SSA into a single tool, (c) shows the diverse tasks that SSA can be used for, (d) formally describes the main SSA methods and algorithms, and (e) provides tutorials on the Rssa package and the use of SSA.

The book offers a valuable resource for a very wide readership, including professional statisticians, specialists in signal and image processing, as well as specialists in numerous applied disciplines interested in using statistical methods for time series analysis, forecasting, signal and image processing. The book is written on a level accessible to a broad audience and includes a wealth of examples; hence it can also be used as a textbook for undergraduate and postgraduate courses on time series analysis and signal processing.

Nina Golyandina received her MSc and PhD degrees in mathematics from St. Petersburg State University, Russia, in 1985 and 1998, respectively. She began working at the same university in 1985, where she is currently an Associate Professor of Statistical Modeling. Her main research interests are in statistical modeling and applied statistics, especially time series investigation by means of singular spectrum analysis.  Dr. Golyandina is the coauthor of 2 monographs on singular spectrum analysis and of more than 30 research papers in refereed journals related to applied probability and statistics.

Anton Korobeynikov received his MSc and PhD degrees in applied mathematics from St. Petersburg State University, Russia, in 2007 and 2010, respectively. He began working at St. Petersburg State University in 2007, where he currently holds the position of Associate Professor of Statistical Modeling. Dr. Korobeynikov’s main research interests include computational and applied statistics, including time series analysis, efficient implementation of algorithms of computational statistics, and probabilistic methods in bioinformatics. He is the original author of the R-package Rssa for singular spectrum analysis.

Anatoly Zhigljavsky graduated from the Faculty of Mathematics, St. Petersburg State University, in 1976. He received his PhD in applied probability in 1981 and was a Professor of Statistics at the same university from 1989 to 1997. Since 1997 he has been a Professor and Chair of Statistics at Cardiff University.  Anatoly Zhigljavsky is the author or co-author of 9 monographs on the topics of SSA for time series analysis, stochastic global optimization, optimal experimental design and dynamical systems; he is the editor/co-editor of 8 books on various topics and the author of over 150 research papers in peer-reviewed journals. He has organized several major conferences on time series analysis, experimental design and global optimization, and serves on the editorial board of two journals: Journal of Global Optimization, and Statistics and Its Interface. He is also the director of the Centre for Optimisation and Its Applications at Cardiff University.