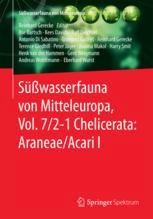 The uncorrected reprint of this volume, originally published in 2006, makes this publication, popular among experts, available again.

Chelicerata are a basically terrestrial group of invertebrates, including many clades whose representatives have never found an evolutionary way to aquatic live. An exception is made by the spiders, which include, apart from the famous Argyroneta aquatica, a considerable number of hygrophilous species, and by the highly diverse aquatic mites which in inland water habitats are represented by members of numerous different clades having evolved an aquatic or amphibious lifestyle along various evolutionary pathways. For the first time in limnofaunistic bibliography, the present taxonomic knowledge about these different groups of invertebrates is brought together in an overview for the Central-European fauna.

This first volume includes taxonomic keys and ecological information concerning hygrophilous and aquatic spiders, a general introduction to mites, and the treatment of three mite groups generally known from terrestrial habitats (Acaridida, Oribatida, terrestrial Parasitengona). Furthermore, the freshwater-dwelling representatives of the originally marine Halacaridae are treated, and the species-rich true freshwater mites (Hydrachnidia) are represented in a general introduction. Out of the latter group, detailed taxonomic treatment and determination keys are presented for members of the superfamilies Stygothrombioidea, Hydrovolzioidea, Eylaoidea, and Hydrachnoidea.

Two further volumes include the remaining four superfamilies of Hydrachnidia. The chelicerata volumes of this series are a basic tool for all limnologists interested in diversity and ecology - in particular for biologists investigating the ecotones between ground- and surface water, between benthos and plankton, and between water and land.

The editor
Reinhard Gerecke is free lance zoologist and lecturer at the institute of Evolution and Ecology at the university of Tübingen.
Show all
About the authors