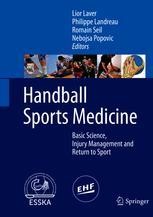 This book is designed to help improve the medical care of athletes across the world who play team handball – including not only handball itself but also such sports as beach volleyball and mini-handball. It provides concise practical information on the nature of frequently encountered injuries, the management of these injuries, injury prevention, and rehabilitation following treatment. Individual sections also focus on physiologic, endocrinologic, biomechanical, and nutritional aspects; special considerations in particular groups of players; and psychological issues. The medical needs of a handball team are explained, and guidance offered on preparticipation assessment and screening. All of the authors are leaders in their field. Their excellent teamwork ensures that the book, published in collaboration with ESSKA, will represent a superb, comprehensive educational resource. It will meet the needs of both handball medical caregivers and handball personnel, providing readily accessible answers to a wide range of medical questions and facilitating effective collaboration among the various professionals involved in team handball.

Dr. Lior Laver, MD: A Sports Orthopaedic surgeon, originally from Israel with a main interest and focus on arthroscopic treatment of sports related injuries of the knee, hip and shoulder. With the mixture of practical, grass-root level experience and academic credentials Dr. Laver is highly active in the international sports medicine stage with frequent appearances in the top international sports medicine conferences. His main field of research is treatment outcomes and return to sport decision making athletic populations. He has published many peer-reviewed articles and book chapters and is a reviewer for KSSTA, the official journal of ESSKA. He is also a board member in the esteemed ESSKA arthroscopy committee as well as the new European Sports Medicine Associates (ESMA). Dr. Laver brings a unique perspective, combining his personal experience as a former professional handball player at high international level and the hands on medical experience that he has accumulated internationally with some of the highest level organizations such as the FC Barcelona football club in Spain, Duke University athletics department (football and basketball) in the US and Israeli top clubs as Maccabi Tel-Aviv football club, Bnei-HaSharon basketball club, the Israeli national teams in volleyball and of course – handball national teams. He is currently involved in establishing the medical/scientific platform in the European Handball Federation (EHF) and has recently organized the EHF Scientific meeting in Romania (2015) and the ESSKA-EHF symposium in Barcelona (2016).

Philippe Landreau, MD, is an Orthopaedic Surgeon and currently the Chief of Surgery at Aspetar Orthopaedic and Sports Medicine Hospital in Doha, Qatar. He established and is heading the first Sports Surgery Training Center in the Middle East He specializes in sports traumatology, knee, shoulder and arthroscopic surgery. Before joining Aspetar, he previously worked in Paris, France, where he combined private and public surgical activity (Clinique du Sport, American Hospital of Paris, Hôpital La Pitié- Salpétrière). Throughout his career, Dr Landreau was the reference surgeon for numerous regional and national sports teams including the Stade Français Rugby team, the French National Judo team, the French National Handball feminine team, and the American Football Flash team, etc.He is currently Co-Chairman of the Development Committee of ISAKOS (International Society of Arthroscopy, Knee Surgery and Orthopaedic Sports Medicine) and member of the ISAKOS Program Committee. In addition, Dr Landreau partakes multiple editorial positions in the field of sports traumatology including the Director of Book Collection, Editor- In- Chief, and member of the Scientific Committee of several publications. .
Prof. Seil studied medicine in Luxembourg and Brussels. He trained in Belgium and Germany (Dept. of Orthopaedic Surgery, University of Saarland Medical School, Homburg/Saar-Germany). He wrote his doctoral thesis on meniscal repair and his professoral thesis on pediatric anterior cruciate ligament injuries. Prof. Seil works as an orthopaedic surgeon at the Centre Hospitalier de Luxembourg where he is Head of the Department of the musculoskeletal system. His main areas of clinical activity are orthopaedic sports medicine as well as primary and revision knee reconstructive surgery. He is extraordinary professor in orthopaedic surgery at the University of Saarland, Homburg Saar, co-director of the Luxembourg Olympic Medical Centre and of the Sports Medicine Research Laboratory of the “Luxembourg Institute of Health”. Prof. Seil serves as editorial board member, board of trustee’s member or co-editor in several scientific journals in orthopaedic surgery, sports medicine and arthroscopy. He authored and co-authored numerous peer-reviewed publications and book chapters. Prof. Seil is a former handball player and author of early publications on handball injuries. He is currently President of the European Society of Sports Traumatology, Knee Surgery and Arthroscopy (ESSKA), as well as incoming president of the German-speaking Society in Orthopaedic and Traumatologic Sports Medicine (GOTS). From 2003 until 2005, he was chairman of the arthroscopy committee of the International Society of Arthroscopy, Knee Surgery and Orthopaedic Sports Medicine (ISAKOS). In 2014 he was president of the Annual Meeting of the French Arthroscopy Society in Luxembourg and in 2016 he served as president of the Annual Meeting of the GOTS in Munich.

Nebojsa Popovic MD PhD is an orthopaedic and sports medicine surgeon pioneering surgical services at Aspetar since the opening in 2007 .He is    Senior  Medical Advisor to the Director General  at Aspetar  Orthopaedic and Sports Medicine Hospital . He is Associated Professor of Clinical Orthopedic Surgery at Weil Cornell Medical School and visiting Professor at Medical School University of Belgrade.Dr Popovic’s previous positions have been Clinical Chief in the Orthopedic Department at  UniversityHospital Liege Belgium.He published more then 70 scientific paper ,two Books and numerous chapters.Dr Popovic is Editor in Chief of Aspetar Sport Medicine Journal.He was himself a world class handball player ,playing 160 times for National team of ex Yugoslavia . He won a Gold Medal in the sport at the 1972 Olympics Games in Munich, , and European Champions League 1976 with his club.He was twice selected for the World All Stars Handball Team .In 1988 in Seoul and 1992 in Barcelona  Olympic Games he served as Chief Medical Officer of Yugoslavian Olympic team. . Since 2013 he has been a Member of the Medical Commission of the World Olympian Association and in 2015 served as President of the Medical Commission for the 24th Men’s World Handball Championship.