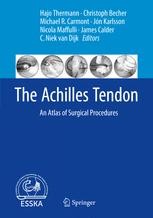 An Atlas of Surgical Procedures

This book, written by leading experts in the field, is a comprehensive guide to the best available techniques in Achilles tendon surgery. Each surgical procedure is described step by step, covering all of the approaches employed for the most common and important Achilles tendon pathologies. The clear descriptions are complemented by superb drawings prepared by a medical artist on the basis of photographs supplied by the authors. Pearls and possible pitfalls are identified to ensure optimal outcomes for patients. The book is the outcome of a collaboration among international Achilles tendon experts – the Achilles Tendon Study Group – that has already resulted in four other books on current concepts relating to the Achilles tendon. Like these previous volumes, The Achilles Tendon – An Atlas of Surgical Procedures is based on the highest level of evidence and expertise. It will be invaluable for orthopaedic surgeons, trauma surgeons, and residents, assisting them in their daily clinical work.

Hajo Thermann, MD, PhD, is a specialist in knee and foot surgery and trauma surgery and Medical Director of the ATOS Clinic in Heidelberg, Germany. He is also a Professor at Hannover Medical School, where he has lectured since 1993, and Visiting Professor at the 3rd Military University, Chongqing, China. Prof. Thermann is a longstanding member of the management boards of both the European Society of Foot and Ankle Surgeons and the European Foot and Ankle Society. He is an international member of the American Orthopaedic Foot and Ankle Society and has been a member of the society’s “Biomechanics of the Foot and Ankle” Workgroup since 1995. He is a member of the editorial boards of the European Journal of Foot and Ankle Surgery and Foot and Ankle International.
Nicola Maffulli, MD, PhD, is Full Professor of Physical and Rehabilitative Medicine and Consultant Trauma and Orthopaedic Surgeon at the University of Salerno School of Medicine and Surgery, Salerno, Italy. He is also Honorary Professor of Sports and Exercise Medicine and Consultant Trauma and Orthopaedic Surgeon at Queen Mary University of London Barts and The London School of Medicine and Dentistry, London, UK. Prof. Maffulli was the first non-British professor to be awarded Fellowship of the Royal College of Surgeons in Orthopaedics. In 2012 he was awarded Fellowship of the Royal College of Physicians and he is an Honorary Fellow of the American Orthopaedic Society for Sports Medicine. He was Lead of Foot and Ankle Surgery Services at the London 2012 Olympics and Paralympics Games.
Jon Karlsson, MD, PhD, has been Academic Head at the Orthopaedic Department, Sahlgrenska Academy, University of Gothenburg, Sweden, since 2001, prior to which he was Clinical Head of the Orthopaedic Department of Sahlgrenska University Hospital. He was appointed Professor of Orthopaedics and Sports Traumatology in 1998. Prof. Karlsson served as President of the Swedish Association of Sports Medicine from 1999 to 2001. Since 2008 he has been Editor-in-Chief of KSSTA, the official journal of ESSKA. He was program chairman of the biennial ESSKA congress in 2006, 2008, and 2010. Prof. Karlsson is also current secretary of the ISAKOS Executive Board of Directors. He is the author of more than 300 peer-reviewed papers and has edited/authored 26 books in Orthopaedics and Sports Traumatology.
C. Niek van Dijk, MD, PhD, is Full Professor in Orthopaedics and Head of the Orthopaedic Department at Academic Medical Centre, University of Amsterdam, the Netherlands. He is also Founder and Director of the Orthopaedic Center Amsterdam (ORCA). Dr. van Dijk served as President of ESSKA from 2010 to 2012 and in 2014 was President of the biennial ESSKA Congress in Amsterdam. He is a past president of both the Dutch Orthopaedic Association (NOV) and the Nordic Orthopaedic Federation (NOF). He has chaired the ISAKOS Arthroscopy Committee (2005–7) and is current Editor in Chief of the Journal of ISAKOS. He has authored or edited 11 books, including most recently Ankle Arthroscopy: Techniques Developed by the Amsterdam Foot and Ankle School and Talar Osteochondral Defects.
James David Forbes Calder, TD, MD, FRCS(Tr. & Orth.), FFSEM(UK), is a consultant orthopaedic foot and ankle surgeon with an international reputation in the treatment of sports injuries. Since 2010 he has worked at Chelsea and Westminster Hospital NHS Foundation Trust, London, UK, and he is currently a Visiting Professor at Imperial College, London. After gaining his medical degree, Prof. Calder completed a Foot and Ankle Fellowship at the Brisbane Foot and Ankle Centre in Australia and later undertook an AOFAS Travelling Fellowship in the USA. Since 2008, he has been a sub-specialty editor and an editorial board member for Bone and Joint Journal and an editorial board member for Knee Surgery, Sports Traumatology, Arthroscopy (KSSTA).