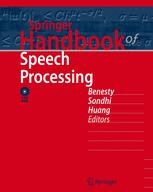 From common consumer products such as cell phones and MP3 players to more sophisticated projects such as human-machine interfaces and responsive robots, speech technologies are now everywhere. Many think that it is just a matter of time before more applications of the science of speech become inescapable in our daily life. This handbook is meant to play a fundamental role for sustainable progress in speech research and development. Springer Handbook of Speech Processing targets three categories of readers: graduate students, professors and active researchers in academia and research labs, and engineers in industry who need to understand or implement some specific algorithms for their speech-related products. The handbook could also be used as a sourcebook for one or more graduate courses on signal processing for speech and different aspects of speech processing and applications. A quickly accessible source of application-oriented, authoritative and comprehensive information about these technologies, it combines the established knowledge derived from research in such fast evolving disciplines as Signal Processing and Communications, Acoustics, Computer Science and Linguistics.

Jacob Benesty received the Masters degree in microwaves from Pierre & Marie Curie University, France, in 1987, and the Ph.D. degree in control and signal processing from Orsay University, France, in 1991. From January 1994 to July 1995, he worked at Telecom Paris University on multichannel adaptive filters and acoustic echo cancellation. From October 1995 to May 2003, he was first a Consultant and then a Member of the Technical Staff at Bell Laboratories, Murray Hill, NJ, USA. In May 2003, he joined the University of Quebec, INRS-EMT, in Montreal, Quebec, Canada, as a professor. His research interests are in signal processing, acoustic signal processing, and multimedia communications. Dr. Benesty received the 2001 Best Paper Award from the IEEE Signal Processing Society. He co-authored the books "Acoustic MIMO Signal Processing" (Springer-Verlag, Berlin, 2006) and "Advances in Network and Acoustic Echo Cancellation" (Springer-Verlag, Berlin, 2001). He is also a co-editor/co-author of four other books.

M. Mohan Sondhi is a consultant at Avaya Research Labs, Basking Ridge, New Jersey. Prior to joining Avaya he spent 39 years at Bell Labs, from where he retired in 2001. He holds undergraduate degrees in Physics and Electrical Communication Engineering, and M.S and Ph.D. degrees in Electrical Engineering. At Bell Labs he conducted research in speech signal processing, echo cancellation, acoustical inverse problems, speech recognition, articulatory models for analysis and synthesis of speech and modeling of auditory and visual processing by humans.

He has authored or co-authored several book chapters, over 120 journal articles, 10 patents, and the book Advances in Network and Acoustic Echo Cancellation. He has co-edited the book Advances in Speech Signal Processing. He has been a Distinguished Lecturer of the ASSP society, and an Associate Editor of Trans. ASSP, and has been a visiting scientist at laboratories in Sweden, France, and Japan. He has been on the editorial board of the Journal Speech Communication, and has co-edited a special issue of the Transactions of the IEEE on Speech and Audio Processing, He is a Bell Labs Fellow, a co-recipient of a best paper award of the IEEE ASSP society, and a co-recipient of IEEE’s E.E. Sumner award for 1998.

Yiteng (Arden) Huang received the B.S. degree from the Tsinghua University in 1994, the M.S. and Ph.D. degrees from the Georgia Institute of Technology (Georgia Tech) in 1998 and 2001, respectively, all in electrical and computer engineering.

During his doctoral studies from 1998 to 2001, he was a research assistant with the Center of Signal and Image Processing, Georgia Tech, and was a teaching assistant with the School of Electrical and Computer Engineering, Georgia Tech. In the summers from 1998 to 2000, he worked with Bell Laboratories, Murray Hill, NJ and engaged in research on passive acoustic source localization with microphone arrays. Upon graduation, he joined Bell Laboratories as a Member of Technical Staff in March 2001. His current research interests are in acoustic signal processing and multimedia communications.

"This massive volume contains 53 chapters and covers just about all aspects of the field of speech processing. … The editors are commended for producing a valuable tool in the understanding of speech and speech synthesis/recognition. The book is a valuable addition to the bookshelf of researchers, speech scientists, and engineers." (Richard J. Peppin, International Journal of Acoustics and Vibration, Vol. 13 (1), 2008)

“This book is a comprehensive overview of most of the major topics associated with speech processing written by the most renowned authors in each topic. The book is well structured with a clearly organized topics. It is intended for use by the researcher … . book is organized in nine sections that cover all current speech applications. … In conclusion, I would highly recommend that anyone interested in speech processing have a copy of this encyclopaedic work.” (Eduardo López Gonsalo, The Phonetician, Vol. I-II (97/98), 2008)