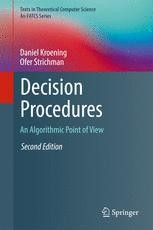 An Algorithmic Point of View

A decision procedure is an algorithm that, given a decision problem, terminates with a correct yes/no answer. Here, the authors focus on theories that are expressive enough to model real problems, but are still decidable. Specifically, the book concentrates on decision procedures for first-order theories that are commonly used in automated verification and reasoning, theorem-proving, compiler optimization and operations research. The techniques described in the book draw from fields such as graph theory and logic, and are routinely used in industry.

The authors introduce the basic terminology of SAT, Satisfiability Modulo Theories (SMT) and the DPLL(T) framework. Then, in separate chapters, they study decision procedures for propositional logic; equalities and uninterpreted functions; linear arithmetic; bit vectors; arrays; pointer logic; and quantified formulas. They also study the problem of deciding combined theories based on the Nelson-Oppen procedure.

The first edition of this book was adopted as a textbook in courses worldwide. It was published in 2008 and the field now called SMT was then in its infancy, without the standard terminology and canonic algorithms it has now; this second edition reflects these changes. It brings forward the DPLL(T) framework. It also expands the SAT chapter with modern SAT heuristics, and includes a new section about incremental satisfiability, and the related Constraints Satisfaction Problem (CSP).  The chapter about quantifiers was expanded with a new section about general quantification using E-matching and a section about Effectively Propositional Reasoning (EPR). The book also includes a new chapter on the application of SMT in industrial software engineering and in computational biology, coauthored by Nikolaj Bjørner and Leonardo de Moura, and Hillel Kugler, respectively.

Each chapter includes a detailed bibliography and exercises. Lecturers’ slides and a C++ library for rapid prototyping of decision procedures are available from the authors’ website.

Daniel Kroening is a professor in the Dept. of Computer Science at the University of Oxford; his interests include automated verification, software engineering, and programming languages. Ofer Strichman is a professor in the faculty of industrial engineering and management at the Technion; his research interests include formal verification of software and hardware, and decision procedures for fragments of first-order logic.

“This is an excellent book, which I am delighted to have the chance to review. … The text and the supporting material have been invaluable, stepping the reader through decision procedures and their combinations. … I highly recommend the book to those interested in understanding and contributing to the world of SAT and SMT solving ... .” (Rosemary Monahan, Formal Aspects of Computing, Vol. 30 (06), November, 2018)