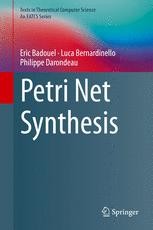 In Part I the authors introduce elementary net synthesis. In Part II they explain variations of elementary net synthesis and the unified theory of net synthesis. The first three chapters of Part III address the linear algebraic structure of regions, synthesis of P/T-nets from finite initialized transition systems, and the synthesis of unbounded P/T-nets. Finally, the last chapter in Part III and the chapters in Part IV cover more advanced topics and applications: P/T-net with the step firing rule, extracting concurrency from transition systems, process discovery, supervisory control, and the design of speed-independent circuits.

Most chapters conclude with exercises, and the book is a valuable reference for both graduate students of computer science and electrical engineering and researchers and engineers in this domain.

Dr. Eric Badouel is a researcher at IRISA/INRIA Rennes–Bretagne Atlantique in Rennes. His research interests include concurrency and Petri nets.

Dr. Luca Bernardinello is a researcher in the Dipartimento di Informatica, Sistemistica e Comunicazione of the Università degli studi di Milano-Bicocca. His research interests include concurrency and Petri nets.

Dr. Philippe Darondeau was a researcher at IRISA/INRIA Rennes–Bretagne Atlantique in Rennes. His research interests included concurrency and Petri nets. Dr. Darondeau passed away in 2013, during the final writing of the book.

“By reading, studying and perhaps using the book Petri net synthesis as a textbook for a course, one takes an interesting and adventurous journey in the field of relating behavioural and structural descriptions of concurrent systems. Petri net synthesis is the best candidate to be a reference book in this field, and reading it is a great pleasure. … book is organized in such a way that it can be used as a textbook for several master courses … .” (Giovanni Michele Pinna, Mathematical Reviews, January, 2017)

“This book provides an impressive in-depth account of a wide range of the results and techniques for Petri net synthesis. It covers both theory and algorithms and provides a good insight into applications. It is valuable for novices as well as for researchers as a rich and reliable reference as well as a source of relevant research problems.” (Jörg Desel, zbMATH 1351.68003, 2017)