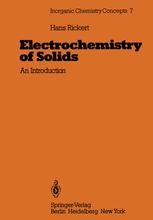 This book is the completely revised and extended version of the German edition "Einfiihrung in die Elektrochemie fester Stoffe" which appeared in 1973. Since then, the subject of the electro­ chemistry of solids has developed further and a large number of new solid electrolytes have been discovered. With the help of solid electrolytes, i. e. solid ionic conductors, galvanic cells are constantly being built for thermodynamic or kinetic investigations and for technical applications. Though the book takes these new develop­ ments into consideration, its main aim is to provide an introduction to the electrochemistry of solids, emphasizing the principles of the subject but not attempting to present a complete account of the existing literature. The latter can be found in handbooks and specialists' reports of conferences in this field; these are referred to in the text. This book is written for scientists and graduate stu­ dents who require an approach that will familiarize them with this field. It is assumed that the reader will be acquainted with the fundamentals of physical chemistry. The various chapters have been written so that most of them can be read independently of each other. Parts which may be omitted during a first reading are printed in small type. Of vital importance for the publication of this English edition have been the comments, suggestions and the help of colleagues and co-workers. I would particularly like to express my thanks to Dr. Holzapfel, Dl'. Lohmar, Professor Mitchell, Dr.