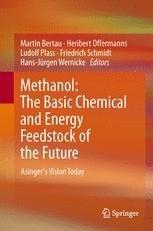 Methanol: The Basic Chemical and Energy Feedstock of the Future

Methanol - The Chemical and Energy Feedstock of the Future offers a visionary yet unbiased view of methanol technology. Based on the groundbreaking 1986 publication "Methanol" by Friedrich Asinger, this book includes contributions by more than 40 experts from industry and academia. The authors and editors provide a comprehensive exposition of methanol chemistry and technology which is useful for a wide variety of scientists working in chemistry and energy related industries as well as academic researchers and even decision-makers and organisations concerned with the future of chemical and energy feedstocks.

Prof. Dr. Martin Bertau, Chair of Chemical Technology at Freiberg University of Mining and Technology received his PhD in 1997 at the University of Freiburg/Br. He then headed the biotechnology division of Rohner Ltd. (Dynamit-Nobel group) in Basle, Switzerland. In the year 2000 he changed to Dresden University of Technology where he received his venia legendi as well as facultas docendi both for biochemistry and organic chemistry in 2005. Since 2006 he heads the Institute of Chemical Technology at Freiberg University of Mining and Technology. His key areas of activity comprise resource chemistry and white biotechnology with the aim of developing integrated processes (zero-waste concept) for producing and recycling of chemistry raw materials like strategic metals (rare earth metals, lithium, indium and others) and silicon, but also utilising CO2 as well as lignocellulose for the production of base chemicals. For his work on the first industrial process for phosphate recycling he in 2012 was awarded the resource efficiency price of the German Federal Ministry of Economics and Technology.

Heribert Offermanns studied Chemistry at the RWTH Aachen and got his Diploma in 1963 and his Doktor degree at the Institute of Chemical Technology and Petrochemistry of the RWTH Aachen (Prof. Dr. Friedrich Asinger) in1966. He joined Degussa AG, Frankfurt in1968 and served in various positions (R&D organic chemistry, drug research, and production of fumed silica, corporate technology in Germany, Belgium and USA). From 1976 until retirement in 1999 he was for nearly 25 years a member of the Executive Board where he was responsible for Central Functions (R&D, Chemical Engineering), operational activities (Industrial Chemicals) and regions (USA, South America). Under his leadership Degussa entered very successfully the field of biotechnology (mainly amino acids). He was a member of the council of the Johann-Wolfgang-Goethe-University, Frankfurt/M., a board member of the "Freunde und Förderer" of the University and Honorary Professor. He served as a senator of the "German Science Foundation "(DFG). He also was member and later on president of the "Chemical Industry Fund (" Fonds der Chemischen Industrie") and for 13 years member of the board of the German Chemical society" (GDCh). He was awarded Dr.-Ing. E.h. of RWTH Aachen, Honory Member of the" Physikalischer Vereins (Frankfurt) and of the Wilhelm-Ostwald-Gesellschaft (Großbothen)", with the "Carl-Duisberg-Plakette der GDCh", the "Karl-Winnacker-Preis of the “Marburger Universitätsbund” and the “Bundesverdienstkreuz First Class”.

Ludolf Plass studied Mechanical Engineering at the Technical University in Darmstadt
and graduated with a PhD in Chemical Engineering from the University of Erlangen-Nuremberg. He has been employed with Lurgi GmbH for 40 years, among others in charge of the Lurgi Division for Coal and Power Technologies and the Company Lurgi Energy and Environmental Technologies GmbH. For several years he has taken the function of Chief Technology Officer of the Lurgi Group  as Executive Vice President, responsible for Lurgi’s technological processes including R & D. In 2006, he took the responsibility for Product Management, in 2008 for Special Projects. He served as Chairman / Board member of several Lurgi Affiliates and Joint Ventures in Germany, France, Italy, UK, Spain, China, Australia and South Africa. He retired from Lurgi in 2009. Aside from his work with Lurgi he was a member of the Board of Directors of DECHEMA, and worked in several VDMA organizations/functions.
His present assignments include: Senior Advisor to the Management Board of Air Liquide Global E&C Solutions c/o Lurgi GmbH,Frankfurt, Chairman of the Advisory Board of Schaefer Kalk GmbH & Co KG, Diez, Lahn, Chairman of the Advisory Board of Techno-Physik GmbH, Essen, member of the Industry Council  Finatem Beteiligungs Gesellschaft Frankfurt, Main, Chairman of the Advisory Board of  Ecoloop GmbH, Duisburg/Elbingerode/Harz, Vice Chairman of the Supervisory Board Christopherus Heim, Welzheim.

Dr. H. J. Wernicke studied chemistry at the University of Kiel and received his PhD in 1976 (supported by a grant from the German Chemical Industry Association). From 1976 to 1984 he was employed with Linde AG, Munich, where he was involved in engineering and construction of petrochemical plants, and assisted the start-up of a coal-to-liquids complex in South Africa. 1985 he changed to Süd-Chemie AG, München, where he held various positions in the catalyst division, was active as project manager zeolite catalysts and in start-up assistance for a gas-to-liquids complex  in South Africa, business unit manager petrochemical catalysts and VP sales at Süd-Chemie Inc., USA, until he retired in 2011. Within that time, from 1996 to 2011 he was member of the Süd-Chemie Executive Board, and from 2007 to 2011 Vice Chairman of the Executive Board. Since 2007 he is member of the board of DECHEMA which he headed from 2010 to 2012 as chairman.  From 2008 to 2010 he was founding board member of the German Catalysis Society (GeCats), and from 1997 to 2011 member of the Board of Trustees of the Chemical Industry Fund. He is member of the Board of Curators of the Leibniz Institute for Catalysis, Rostock and of the Council of the University of Bayreuth.