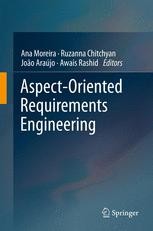 Broadly-scoped requirements such as security, privacy, and response time are a major source of complexity in modern software systems. This is due to their tangled inter-relationships with and effects on other requirements. Aspect-Oriented Requirements Engineering (AORE) aims to facilitate modularisation of such broadly-scoped requirements, so that software developers are able to reason about them in isolation - one at a time. AORE also captures these inter-relationships and effects in well-defined composition specifications, and, in so doing exposes the causes for potential conflicts, trade-offs, and roots for the key early architectural decisions.

Over the last decade, significant work has been carried out in the field of AORE. With this book the editors aim to provide a consolidated overview of these efforts and results. The individual contributions discuss how aspects can be identified, represented, composed and reasoned about, as well as how they are used in specific domains and in industry. Thus, the book does not present one particular AORE approach, but conveys a broad understanding of the aspect-oriented perspective on requirements engineering. The chapters are organized into five sections: concern identification in requirements, concern modelling and composition, domain-specific use of AORE, aspect interactions, and AORE in industry.

This book provides readers with the most comprehensive coverage of AORE and the capabilities it offers to those grappling with the complexity arising from broadly-scoped requirements - a phenomenon that is, without doubt, universal across software systems. Software engineers and related professionals in industry, as well as advanced undergraduate and post-graduate students and researchers, will benefit from these comprehensive descriptions and the industrial case studies.

Ana Moreira is an associate professor at Universidade Nova de Lisboa, Portugal, where she leads the software engineering group. Her main research topics are on advanced modularization, requirements engineering, architecture design, and model-driven development. She is a co-founder of the Early Aspects community and has led several research projects in this area. She has served as a PC chair for International Conferences on AOSD 2009 and MODELS 2013 as well as a member of the Steering Committee for both for a number of years.

Ruzanna Chitchyan is a lecturer in Software Engineering at the Department of Computer Science, University of Leicester, UK. Her current research interests are in requirements modelling and analysis in general, and aspect-oriented requirements engineering and architecture design in particular. She has worked on several major EU-funded projects on these topics and served on the PC of the International Conference on Requirements Engineering, as well as various tracks of the International Conference on AOSD.

João Araújo is an assistant professor at the Department of Informatics, Universidade Nova de Lisboa, Portugal. His principal research interests are in requirements engineering, model-driven engineering and software product lines. He is a co-founder of the Early Aspects workshops and a contributor to several research projects on this topic. He has served on the Program Board for the International Conference on RE in 2013 and as a PC member of several other international conferences.

Awais Rashid is a professor of Software Engineering at Lancaster University, UK, where he leads research on advanced software modularity and composition mechanisms. His current research interests are in AOSD, model-driven engineering and their applications for managing software variability and product lines. He has served as a member of the steering committee of the International AOSD conference, organising chair for AOSD 2004, PC co-chair for AOSD 2006, and conference chair for ECOOP 2011. He is the founding co-editor-in-chief of the Springer journal Transactions on AOSD and is the Coordinator of the European Network of Excellence on Aspect-Oriented Software Development (AOSD-Europe).

Awais Rashid, Ana Moreira and João Araújo are also the recipients of the 2013 The Most Influential AOSD Paper 2003-2013 Award from the AOSD conference.

"This book [...] will prove indispensable for both professionals and advanced students [...]. This discipline [Aspect-Oriented Requirements Engineering] is broadly applicable to industry, as well software projects deal with aspectual requirements at various levels. These aspects need to be identified, reasoned about, and managed, and the techniques and tools presented here will be of great value in this respect." Nathan Carlson, ACM Computing reviews, June 2014